You are here: Home / Technology / Amazon Delivery Drones Will Drop Packages with Parachutes 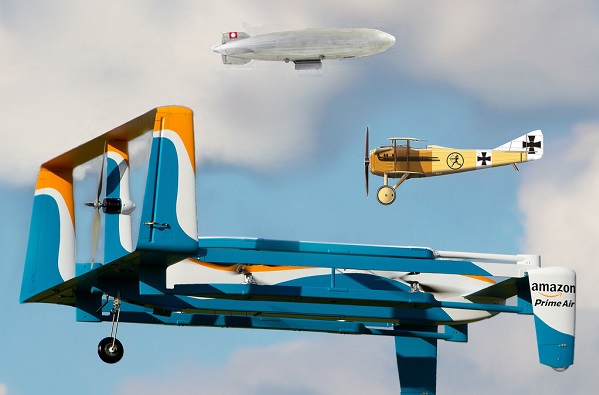 Amazon delivery drones could use parachutes to drop packages.

Online retailers like Amazon are hard at work developing the next delivery system. While we already knew that the company wants to use the increasing popular drones to deliver packages, having tested such a system in the UK. However, a new patent reveals that they plan to drop the packages to your doorstep by using parachutes.

Amazon filed a patent which was published this Tuesday, which reveals that the parachute system could allow drones to deliver their packages without needing to land, while the drone is still in mid-flight.  The patent reveals extensive technical details like how the drone could be able to alter the force applied to the package in order to target a specific landing area.

Amazon reveals that the force will determine the vertical descent path of a specific package. The patent reveals that such a force could be applied in several ways. Either by using electromagnets, spring coils, pneumatic actuators or even parachutes.

Amazon stated that landing drones in order to safely deliver the package is quite inefficient in terms of time and resources spent, which only serves to negate the benefits of using delivery drones. More specifically, the company could save a lot of time and money if they are able to provide the same safe delivery of the package while the drone is still in flight.

However, it’s worth noting that delivery drones will be able to use such a system only certain types of packages, depending on how robust or fragile the item being delivered is. It wouldn’t make much sense to drop a new set of glasses using a parachute.

The recently published patent also reveals how the company hopes to control the package once it was released from the drone. They plan to control it using several control surfaces, which could alter the vertical descent path when it receives instructions from the drone through an RF module. Such as system could allow the package to avoid various mid-air obstacles such as trees.

If Amazon is indeed serious about such a system for their delivery drones, then it is very likely being tested at the company’s secret site near Cambridge in the UK, the location of one of its main research and development centers.