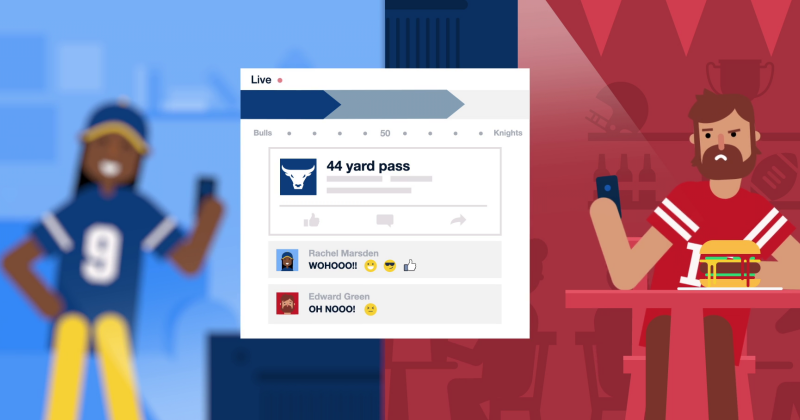 With millions of tweets filling the users’ timelines during the recent NFL playoffs, Twitter is decidedly the de facto place for people who love to liveblog their opinions on sporting events.

However, if there’s something Facebook has taught us, it’s that the company is looking to have a share in all available markets, including the sports one. The no. 1 social network has launched Facebook Sports Stadium, a new section of Facebook designed to serve as a central sports hub.

For all of us who need a way to handle that second-screen activity, Facebook Sports Stadium has found a way to allow users to switch between four tabs. One of these offers a feed with play-by-play details similar to what is published on ESPN’s site, while another shows a Twitter-like section with your friends’ live comments on the topic.

A third tab deals with “expert” comments – those coming from players, verified commentators, and other big names in the field. The final tab will include a live update with detailed stats for the sports event you’re currently watching.

The only thing that will be missing is watching the game itself on Facebook, since the company hasn’t partnered with the major sports networks. Instead, Facebook gets its game data Sportradar, which is enough for Facebook Sports Stadium.

The end scope is to make the new hub a complement to the television experience, not replace it. More than just providing users with information about the game, the Sports Stadium section will also include you in the vital conversation surrounding the game.

The section could also draw more viewers to various games. Maybe you weren’t really paying attention, but then you saw your friends talk about it, so you decide to watch the game as well.

Facebook calls it a win-win for everybody, as it raises awareness for what their content partners are already sharing. While Twitter is definitely the kind when it comes to discussing the minutiae of sporting events, it’s really easy to lose the important bits of a game in the shapeless mass of tweets.

In spite of trying to give sporting events their own home with the Moments feature, following their fast-paced evolution via Twitter hasn’t become as simple as one might hope.

But even though Facebook could bring a more efficient system for discussion, Twitter will still have the upper hand because of the popular retweet feature, allowing users to have their comments or one-liners retweeted and favored by hundreds of like-minded strangers.
Image Source: Slashgear