You are here: Home / World / Light of Peace Still Shines Down in the Holy Site of Bethlehem 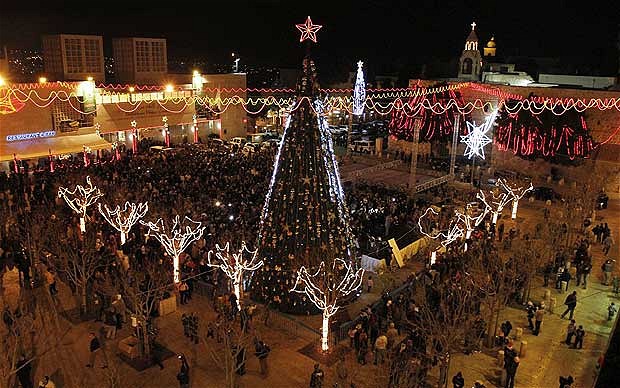 There aren’t as many tourists and pilgrims visiting Bethlehem this Christmas season, at least not as many as in recent years, even though the city remains a beacon of promise of peace.

After negotiations between Palestinians and Israelis fell through last April, random stabbings by frustrated Palestinians led to shootings by Israeli soldiers. Over 140 people died in these tragedies, four of whom where in Bethlehem.

Consequently, most of the traditional Christmas festivities that usually take place in Bethlehem have been canceled, as a way to honor the victims. The recent terrorist attacks reported in the Middle East, France, and California also contributed to the lack of visitors.

However, Bethlehem is full of symbolism – celebrated as Jesus’ place of birth – and that might never cease to disappoint. This Christmas, restorers from Italy have prepared a special unveiling right in Bethlehem’s ancient Church of the Nativity.

It will be the first time in centuries when visitors will be able to see clearly the bright mosaics of the huge angels designed on the ceiling in the 12th century. Glass, gold, and pearl were used for the creation of these works of art, which were then damaged by candle soot and roof leaks.

However, the light of the angels – originally designed to illuminate the visitors’ path of worship – will shine again. Even though the beauty of the 1,700-year-old basilica hints to the spiritual message of Christ, there’s more to it than that.

The amazing restored mosaics have another story, as the church they are adorning was a surprising collaboration between feuding Christian leaders during the dark medieval times. Even the church’s restoration, which begun in 2013, is a remarkable collaboration.

One doesn’t see often the Palestinian Authority and the three Christian denominations that own joint custody of the site agreeing on something. Three more years of restorations will finally bring the project to an end, with a total of $25 million funds from international donations.

Such occasion for the Israelis and Palestinians are badly needed in the area as a way to end the extreme violence. According to a recent statement of Vera Baboun, Bethlehem’s first female mayor and a Christian, “no place in the world will be at peace until peace returns to Bethlehem.”

An Israeli-Palestinian peace deal will require compromises from both sides of the war, but even though talks of peace may have stalled for now, the light of peace still shines down in the holy site of Bethlehem.
Image Source: Telegraph.co.uk