You are here: Home / World / Cholera Outbreak in Yemen is The World’s Worst Epidemic 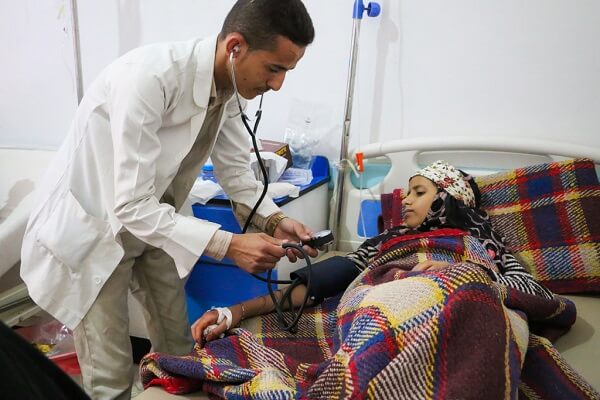 The worst cholera outbreak in recent history affected more than 1,600 Yemeni citizens who fell victim to the disease. Due to a civil war that erupted in the region, public health services have almost collapsed and are currently struggling to contain the outbreak. Apart from the 1,600 victims of the epidemic, nearly 5,000 people are infected every day and several humanitarian organizations have joined the fight to offer relief to the most affected areas.

As a result of the two-year conflict that ravaged Yemen, the cholera outbreak daily affects Yemeni citizens, with over 1,600 deaths in the last two months. As public health services were greatly affected, cases of malnutrition coupled with unsanitary systems could not help the prevention of the disease. Without having access to clean water, children are among the most affected demographic, nearly half of the cases brought to the hospitals in the Yemeni capital, Sana’a.

In particular, the public water pumping stations have ceased to work due to lack of fuel or workers so clean water is still a crucial issue in the fight against the cholera outbreak. The lack of sanitation as well fosters the disease and helps it spread quicker than the doctors’ attempts to curb it.

Cholera is a highly infectious disease that manifests through vomiting and watery diarrhea, leading to severe dehydration. Because almost half of the public health services have been left in ruins, even simple rehydration for the milder cases cannot be administered. Doctors have been calling for interventions, which cannot come as quickly as needed due to the high-conflict status of the area.

Humanitarian organizations such as UNICEF, along with the World Health Organization managed to set up rehydration points and beds for the cholera patients, but the issue of poor sanitary conditions has still not been remedied. Doctors race against time to contain the world’s worst epidemic as medical supplies and further relief are set to arrive in the region.