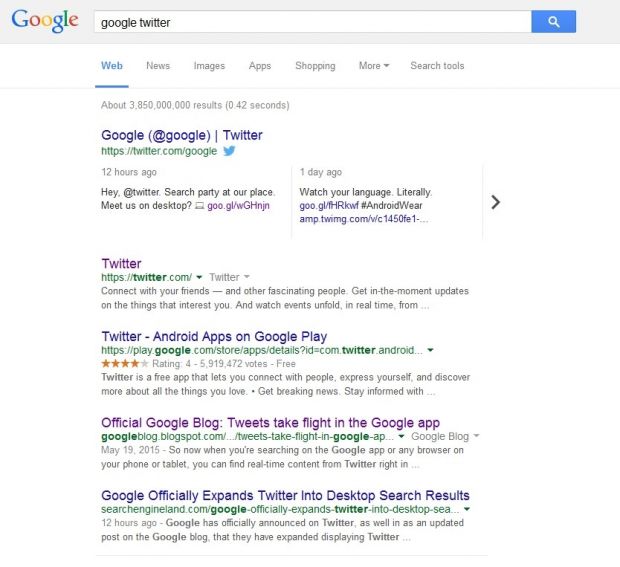 Google made the official announcement through a funny tweet exchange.

Starting of Friday, Google displays Tweets in desktop search results due to new Twitter deal. Twitter posts have been displayed on mobile results since May 2015, but the two companies have decided to expand this service on desktops, as well.

Google and Twitter first signed a partnership in 2009 presupposing the display of tweets among Google’s search results. The deal ended two years later, when COO Ali Rowghani declared he wanted more control over the content of his website. We don’t know yet whether there are any links between the two, but this was also the year when Twitter’s decline became more visible.

The social network is now making efforts to convince Internet users to come back to Twitter and extend its reach. After dropping the 140-character limit of their posts and increasing security measures, Twitter is now using Google as a sort of indirect advertising.

The deal has been renewed in the month of May when google and Twitter announced that tweets will be displayed among mobile search queries. On Friday, the two companies have resorted to a funny tweet exchange to let their users known that Twitter content will also be displayed through desktop search results.

The first to make the invitation was Google, which tweeted Twitter that they are having a search party and the meeting place is on the desktop. The social network agreed to meet up and announced that they are bringing the tweets.

According to the new desktop expansion, tweets will be displayed at the top of the search results right before the advertising messages. Messages will be filtered based on the search terms that Internet users insert, Arac has further explained.