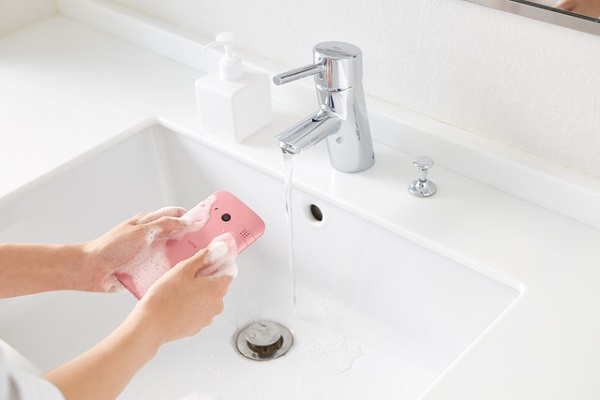 Thanks to their revolutionary functionality, we use smartphones very often during the day. Throughout our activities, we use our phone without much consideration to how clean or hands are. Therefore, our smartphone can become veritable grounds for bacteria.

Considering how often we use it and how rarely people clean their phones with some sort of disinfectant, the devices can become quite unclean, more so than most people imagine. In was with this type of behavior in mind that Kyocera, a Japan-based company, have developed the world’s first washable smartphone.

Although anti-bacterial sprays can also clean your smartphone, nothing beats a good scrub with water and soap. Kyocera named their device, the Rafre, and it’s actually the second soap-and-waterproof device developed by the company. Their first one was unveiled in late 2015, but it did not include resistance to foaming soap, which sort of categorizes most soaps.

The Rafre washable smartphone runs on Android is completely water and soap proof. So much so, that you can even take it into the shower with your and use it as a scrubber, if you don’t have anything better laying around. The washable smartphone wouldn’t be much use if its touchscreen wouldn’t work while wet so that users can have the same experience no matter if they are wet of dry.

In terms of features and specs, the washable smartphone comes with a 5-inch screen, 16 GB of storage, 2GB of RAM, and a 13-megapixel back camera. The phone is powered by a 3,000 mAh battery and surprising enough, Android Nougat 7.0. The device also comes with a preinstalled cooking app.

In order to receive certification for being completely waterproof, the Rafre does not come with a traditional speaker. Instead, it features what is known as smart sonic receiver technology. It is able to transmit sound through vibrations. This type of feature is also present in Xiaomi’s Mi Mix smartphone.

The device will be launching in Japan in March 2017. No price has yet been revealed and it is unclear whether or not the washable smartphone will see an international release in order to satisfy the cleaning standards of germophobes around the world.

What do you think about the washable smartphone?