You are here: Home / Technology / Uber Connects Drivers and Their Passengers Via a Colored Signal 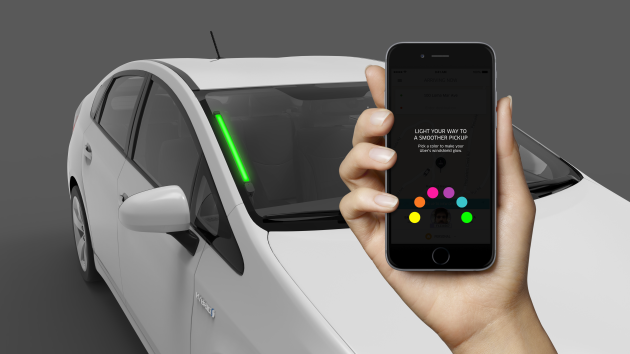 Finding your Uber outside a concert can be a real hassle, given the tons of cars waiting for their passengers who can’t figure out which is the ride they ordered. But the latest feature that Uber created might have a fix for that.

Starting this week, Uber connects drivers and their passengers via a colored signal that allows them to find each other quicker. SPOT is its name and involves a colored LED light installed on the car’s windshield.

While waiting to be picked up, the passenger can choose a color and tap on the corresponding button – pink, yellow, blue, orange, or green – and then search for the matching SPOT light among the waiting Ubers. Passengers can also press down on any of the colored buttons in order to turn their phone that color for easier spotting on behalf of their driver.

Uber is trying to bring down the number of incidents involving a passenger opening the door of the wrong Uber – or even more awkward, the door to a civilian’s car. Before SPOT, users had to rely on hard-to-read license plates, laggy maps, and generic car types.

SPOT is part of Uber’s effort of achieving “the perfect ride,” a feature that is currently undergoing tests only in Seattle. Provided that SPOT catches on and becomes popular, Uber is open to launching it in more markets around the world.

Uber’s effort of cutting precious seconds off each part of the ride – starting from the hail to the drop off – might actually start bearing fruit. There are other features involved, such as the suggesting pickup points, driver destinations, back-to-back rides, and more efficient mapping cars.

Getting even closer to reaching the perfect ride could also mean for Uber to figure out a way to understand how long it takes for passengers to come outside. Seeing that some users are typically a few minutes late at their Uber, the company could notify them about the incoming ride while the driver is further away, shaving precious minutes.

SPOT has its advantages, too. If Uber’s passengers get into the cars faster, waiting times are cut, as well as the burnt gas. In turn, drivers can finish their ride sooner and pickup someone else – which translates in more money for Uber, and more take-away money for drivers. It’s a win-win situation, seeing that the passenger also gets to their destination faster.
Image Source: Geek Wire