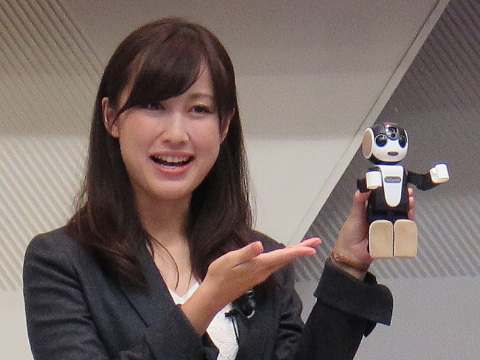 RoboHon is one of the most playful smartphones at present.

Tech developers all over the world fear Sharp’s RoboHon could soon replace smartphones, judging by amazing tasks that the small bot can carry out. The small puppet may look a little bit awkward, but producer Tomotaka Takahashi thinks it is only a while until consumers will get used to the new robot-like phone.

Plain phones have become too… plain, according to some Japanese producers. They think it is time to pay attention to the design of the smartphone, not just its tech specifications. Consequently, designer Tomotaka Takahashi has recently introduced the public to its new robot phone, RobotHon.

The phone looks like a small robot, but it can carry out more or less the same tasks as the regular smartphone. The new device supports 4G connectivity, it can be easily used as a personal assistant as it can provide answers to most of the questions that users are making. The technology, however, is still in its incipient phase as there are still many inputs that the bot cannot recognize.

In spite of the innovative design, tech developers doubt that customers will be interested in the new RoboHon. The reason behind their doubts is the belief that the 8-inch model is slightly too big for the 2-inch screen that the device sports at the back. The phone can snap pictures, but it can be sometimes difficult visualizing them.

While some analysts think the new device may be in jeopardy because it is too attractive for children, Takahashi believes the phone could be a perfect gadget for children. As a matter of fact, the bot looks much better when used by a child instead of an adult, analysts have concluded.

Children can use the robot-smartphone as a toy, as well. The device can be programmed to perform all sorts of tricks from dancing to walking and projecting images on surfaces. As a personal assistant, the phone can read messages out loud, it can be used to set reminders and alarm clocks.

Users can also connect the robot phone to the Internet due to the Wi-Fi and LTE connectivity that the device has been provided with. However, it won’t be very easy to carry around as a result of its 390 grams weight.