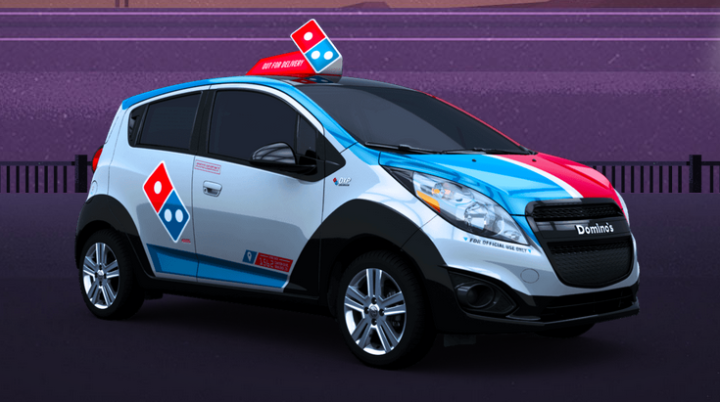 Ordering pizzas for delivery to feed a party of 40 is bound to end with at least some of the food cold and a bit stale. But Domino’s, one of the best known pizza chains and food delivery company in the U.S., thinks it has found a solution for the problem.

Even though this is not the first time Domino’s has designed a car, the new fleet of delivery vehicles is most impressive. Unveiled at the company’s world headquarters in Ann Arbor Township, the Domino’s Delivery Expert is bound to wipe away any image of a run-down delivery car.

What if the delivery car would have a warming oven behind the driver’s seat, one that can be accessed through an exterior door? If that’s what you had in mind, then wow, you just described the retrofitted Chevy Spark subcompact that Domino’s has created for their delivery cars.

According to a statement of Russell Weiner, president of Domino’s USA, this novelty will increase the drivers’ efficiency and allow greater ease in transportation. At the same time, it proves how “absolutely fanatical” Domino’s is about making perfect deliveries.

In order to maximize the number of pizzas that can be transported with one delivery, the company has stripped the vehicle of every seat except for the driver’s; this way, the new Delivery ExPert – the company’s code name for their cars – can hold up to 80 pizzas.

This final vehicle design is the result of hundreds of concepts submitted in an online crowdsourcing competition. Some of the features that made the cut include a car topper with the brand’s name, hubcaps inked with Domino’s logo, and – the most interesting one – a “puddle” spotlight that projects the company’s logo on the ground surrounding the car.

It’s no surprise that red, white and blue, Domino’s color scheme, is repeated in the car’s design. Over the next three months, a partnership with Roush Enterprises, an automotive supplier, will ensure that 100 DXPs will start roving on streets across the U.S.

Seeing that many Domino’s stores are franchised-owned, details about how many franchise owners would want to order the new DXPs have yet to be made clear. Only 5,000 out of the 12,000 stores that Domino’s operates are located in the U.S., while the others are spread out in about 80 countries around the globe.

More than half of Domino’s sales revenue – which are only second to Pizza Hut – is sourced outside the U.S. Pizza delivery covers roughly two-thirds of the company’s business, making sure that roughly 400 million pizzas are delivered each year.
Image Source: IGN