You are here: Home / Technology / Android Fingerprints Are Vulnerable to Hackers 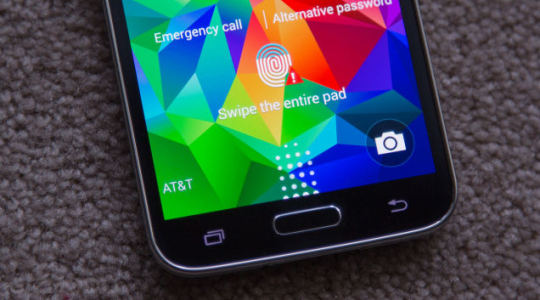 The Samsung Galaxy S5 is among the phones vulnerable to fingerprint fraud.

It seems that more and more problems arise as hackers get around to Google’s tight security system for its famed operating system. Now, Android fingerprints are vulnerable to hackers. There is no need to iterate the huge problem that this is.

Not that much time has passed since the last major security issue with Google’s operating system, dubbed Stagefright, was announced. Google have apparently released a fix for the problem, yet many phones and tablets which have not been upgraded to the latest firmware may still be vulnerable to MMS attacks.

Still, have no fear. If you have upgraded your Android device recently, then you are most probably out of the danger zone. That is both from MMS attacks and from fingerprint fraud.

As for the evidence, professional hackers demonstrated at a conference in Las Vegas how data containing personal information including fingerprint scans could be accessed by those of the hacking community hell-bent on causing harm. The greatest problem seems to be that more and more online retailers are using fingerprint scans as a matter of authenticating purchases. This leaves the users of Android phones having fingerprint scanners extremely vulnerable to thieves who are out to buy something via someone else’s money.

The researchers behind this discovery warn that bridges exist to port apps between the two operating systems, and that the mechanisms in there could be used to adapt the fingerprint scanning hack from Android based phone so iOS ones.

The security study was conducted by two researchers from the FireEye company. Tao Wei and Yulong Zhang presented new methods of hitting the Android devices at a Black Hat conference. However confined the problem is right now, it might be further exploited in the future as more and more devices with the Android OS are beginning to have fingerprint scanning.

The researchers believe that by 2019, half of the smartphones of the world will be equipped to scan your finger. The two hackers said that they will present live demos on previous versions of Android showing how the hacks are possible.

For now, thanks to the team of two, we are all safe. But the disaster of such a hack existing is almost unfathomable.