You are here: Home / Technology / Facebook Messenger Rolls Out Doodle Draw Game to Play with Friends 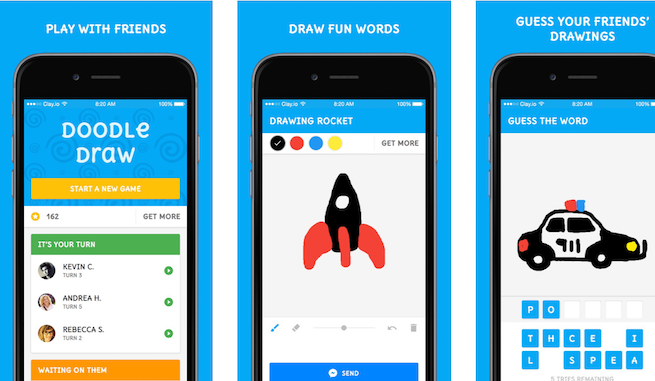 As promised, the Facebook Messenger app has just made its first game available. It’s called “Doodle Draw Game” and it has already rolled out on both Android and iOS platforms.

It’s really a silly but very engaging game, making use of the social network’s primary feature: sharing. The Doodle Draw game offers users suggestions of things to draw with the help of a limited set of colors.

Then, they can send it to a friend, who has to guess what the drawing is. Points are earned by playing or by inviting friends – this will also help you buy more colors. Facebook is expected to monetize the game in the future in order to earn revenue, but that’s no longer surprising.

Ever since the Facebook Messenger app had become an open-to-developers platform, only GIF support and sound effects have received some external attention.

Last month, however, news reached the public that Facebook was planning to finally expand it across different sets of experiences, such as games and utilities if users showed interest.

User engagement with the app is the ultimate goal for the tech giant, as well as opening up to more sources of revenue resulting from the features designed by new developers. In an interview, Facebook commented that the new platform might be best suited if it focused on apps providing content creation.

However, F8 has had the pleasure of announcing that Messenger Platform is open to all developers, in hopes that some fresh eyes and minds on the matter will spark some original content. Basically, Facebook has made it possible to tap inside the minds of developers from all around the globe.

Ever since the announcement, Facebook has been doing its best in luring developers to join in creating for its platform; at the same time, increasing usership has remained a priority, which meant the platform kept adding new features.

Only in the last couple of months, Facebook has rolled out video calling, a tool which enables users to make video calls to a friend using the same application. Another feature allows users to send money via Messenger to friends.

Just this week, the platform has reached a significant milestone, reporting that it has been downloaded over 1 billion times only from the Google Play Store. So it turns out that splitting the Messenger service from the main Facebook app has paid off. More than 600 million accounts is a lot of people keeping a vigil eye on what Facebook will be up to next.
Image Source: Blogo