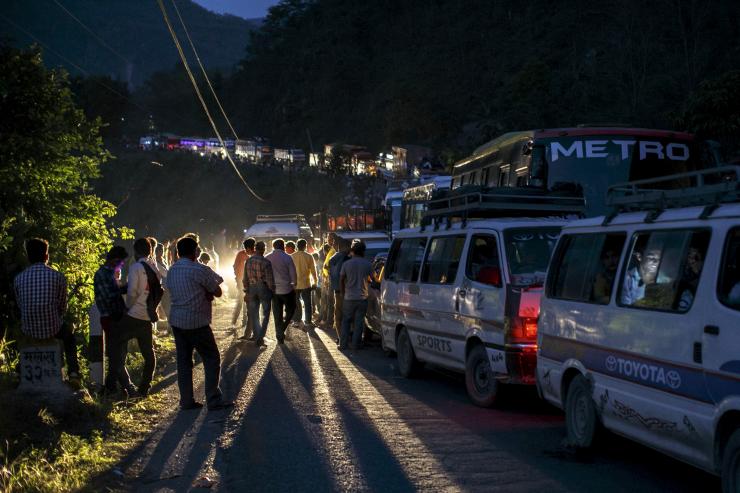 New earthquake replica in Nepal causes massive landslides near Mount Everest, after the massive 7.8 magnitude quake that shook the African country a couple of weeks ago, reports inform.

On Monday, the earthquake caused damaged buildings that barely held up after the first catastrophe to collapse to the ground and kill 66 more people; 17 of those were victims in neighboring India and one died in Tibet.

Tragically, the most fatalities were reported in barely-recovering villages and cities in Kathmandu’s proximity, the same spot where the first disaster hit and took a death toll of more than 8,000 victims.

According to a report from the U.S. military’s Pacific Command, a Marine Corps helicopter that was flying out six in above the affected area with U.S. Marines and two Nepalese soldiers on board to help with disaster relief, is now missing.

This is biggest replica of the first quake, as it measured 7.3 on the Richter scale; the U.S. Geological Survey reported that its center focused on the area east of the capital – very close to the border with Tibet, causing massive landslides in the valleys close to Mount Everest.

Villagers whose houses were brought down by the first quake were saved by the fact that they were already accommodated in tents by the time the replica hit in the area. In some of the worst-affected villages in the Charikot region, aid workers accompanied by soldiers are still pulling people out from under the rubble.

Better and updated reports from the latest disaster are yet to come in, but witnesses report seeing large rocks and mud sliding down the remote sides of the hills.

Dan Sermand, emergency supervisor at Doctors Without Borders, said the situation is still under assessment, and a realistic scale of the disaster remains unknown in spite of the air surveillance which saw several landslide sites.

The crisis grows each day, as the UN managed to raise only 12 percent of the $423 million fund for Nepal’s recovery. Even before the new quake, humanitarian workers said relief materials were lacking, and a lot of inaccessible villages were still waiting for help.

In Chautara, the town hit the hardest by both earthquakes, people are still waiting for tents, tarpaulins and basic medical care kits. Only about a dozen volunteers were flown in to help search for survivors after the April disaster – a depressing scene to witness, with scattered flashlights pointing to collapsed buildings and calling out to for survivors.
Image Source: International Business Times