You are here: Home / Technology / MSN Apps Are Being Released for Amazon, Android and iOS 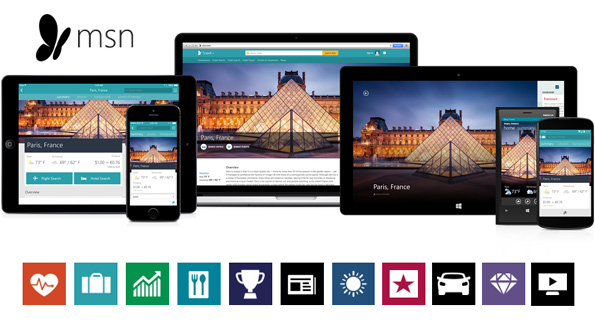 Microsoft is releasing MSN apps for every platform that people use on their phones, tablets or computers.

The company released its MSN platform and users can now get it for Android, Amazon and iOS. The company announced that apps which were, until now, exclusively for Windows and Windows Phone can now be installed on Android phones or tablets, iPad, iPhone, Fire Phone and Amazon Kindle Fire.

The functionality of the apps will let users organize and filter whatever information they receive to suit their interests.

According to Microsoft apps from MSN will perform impeccable on every platform and they bring lots of new stuff. Users in the United States will receive news feeds from The Wall Street Journa, The Washington Post, CNN, AOL and many others. Users from other continents will find content from The Yomiuri Shimbun and Ashai Simbun for Japan, Sky News , The Guardian  and the Telegraph in United Kingdom and many others including India and France.

Even sports fans will have their apps in which they will find game details in-depth, rosters and standings, live scores or schedules and more from more than 150 leagues in the entire world.

MSN platform received a full makeover in September when policies like “cloud-first, mobile-first” were implemented to MSN.com. Visitors of the website can now customize their information and experience with applications such as Health & Fitness, Weather, Food & Drink and Money. The Weather application will be available in a few months for iOS. For now it’s only available for Android, Amazon and Google Play.

Another announcement made by Microsoft is that they bought HockeyApp which is an applications distribution service and a mobile crash analytics. This application will be implemented into Video Studio Online and Application Insights service.

The HockeyApp is used for testing new mobile software and distributing. TestFlight is a similar application from Apple and of course it works only on iOS, while this HockeyApp is a multiplatform application.