You are here: Home / Archives for Msn Platform for Android 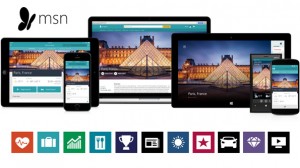 Microsoft is releasing MSN apps for every platform that people use on their phones, tablets or computers. The company released its MSN platform and users can now get it for Android, Amazon and iOS. The company announced that apps which were, until now, exclusively for Windows and Windows Phone can now be installed on Android phones or tablets, iPad, iPhone, Fire Phone and Amazon Kindle … END_OF_DOCUMENT_TOKEN_TO_BE_REPLACED