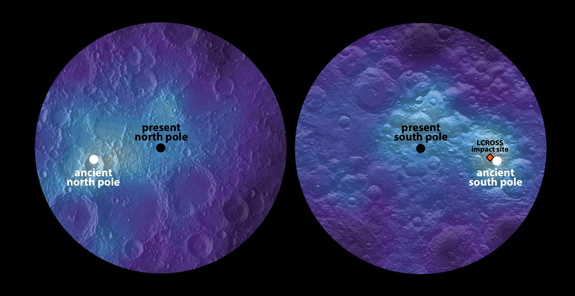 Scientists have learned a bit more about Earth’s natural satellite thanks to some precious data trapped in the ancient lunar ice.

It turns out that the moon’s axis — around which our planet’s moon rotates — had experienced a 6 degrees shift over a billion years.

The team of Matthew Siegler at the Southern Methodist University studied NASA’s data on lunar polar hydrogen. This element is believed to help form the ice hidden from the sun in craters that are spread over the south and north poles of the moon.

Researchers found the frozen-water deposits seemed to be shifted from the moon’s original axis, which led them to believe the pole on which Earth’s satellite orbits could have tilted at some point in its history.

The fact that the offset is noticeable at both poles, yet in opposite directions further supports the new theory. According to Siegler, the changes occurred in a 1 billion-year span approximately 3 billion years ago.

The familiar Man on the Moon had changed due to the heating coming from the interior of the moon; consequently, the man’s face moved upward when the pole altered positions. When the pole moved, the planetary scientist explained the Man on the Moon turned his nose towards Earth.

Compared to Earth, the tilt is as if our axis would move from Antarctica to Australia. This kind of major changes doesn’t happen every now and again.

A planet’s axis depends on its mass; in the case of the moon, the pole shift may have been caused by severe volcanic activity, which led to a massive change in mass.

In other words, multiple ancient volcanoes erupted billions of years apart resulted in the melting of the moon’s mantle. The result is visible from Earth – the darker patches humans witness at night.

This mass change had caused the entire moon to move. The relocation of the moon’s axis took over a billion years as the slow movement eventually shifted the axis roughly 125 miles.

Lunar ice is also a key player in unlocking other space mysteries, such as the existence of water on both Earth and the moon.

As the new theory finds a strong correlation with true polar wander, this ancient lunar ice could represent a “time capsule” with more information about the original water on Earth.
Image Source: Space