You are here: Home / Tech & Science / This Asteroid in Kuiper Belt Is Nothing Scientists Have Seen Before 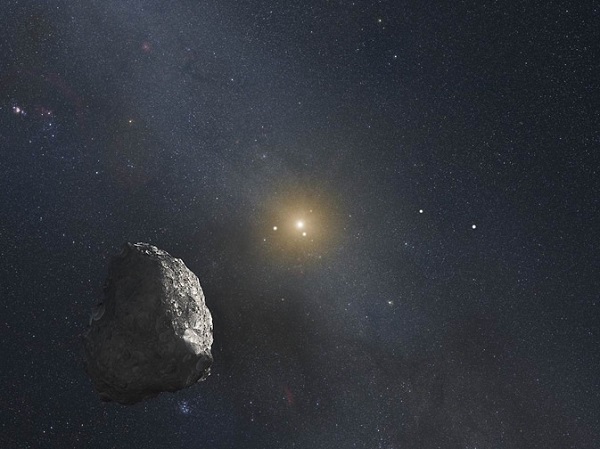 Researchers discovered a one-of-a-kind asteroid in the Kuiper Belt some 2,500,000,000 miles from our planet. Unlike other space bodies populating the region, KBO 2004 EW95 is extremely unusual.

The asteroid is the only space rock in the asteroid belt to be carbon-rich. Astronomers are over thrilled with the findings, as they confirmed an older theory about the solar system’s formation called the Grand Tack theory.

According to the hypothesis, the gas giant planets in the early solar system formed tightly together. But when they started moving apart, their immense gravitational forces pushed planetary bits to the outer parts of the solar system.

Scientists believe that asteroid 2004 EW95 is one of those relics from the distant past. They believe that the space rock was not always so cold and distant from our host star. In fact, the space rock likely landed in the Kuiper Belt after being ejected from his home and traveling billions of miles.

2004 EW95 is not the only Kuiper Belt Object (KBO) that has stirred scientists’ interest, but it is a highly unusual one.

Scientists believe that there might be other KBOs just as strange out there since the icy space rocks are extremely hard to study.

Nevertheless, KBO 2004 EW95 is unique in many ways. The spectroscopic analysis revealed that it doesn’t have a match in any other known KBOs. Scientists studied the asteroid using all sorts of methods. All approaches led to one conclusion: 2004 EW95 is an “outlier” and a “weirdo.”

A team published a research paper on the findings this week in the Astrophysical Journal Letters. The study further details the asteroid intriguing possible origins.

Multiple scientific instruments revealed that the asteroid is a rocky object, not an icy one, which is highly unusual for a Kuiper Belt inhabitant. 2004 EW95 was first discovered by the Hubble Space telescope, and it is the first carbon-rich KBO known to scientists.
Image Source: Flickr