You are here: Home / Tech & Science / Take a Virtual Tour of the Martian Surface in 360-degree Video 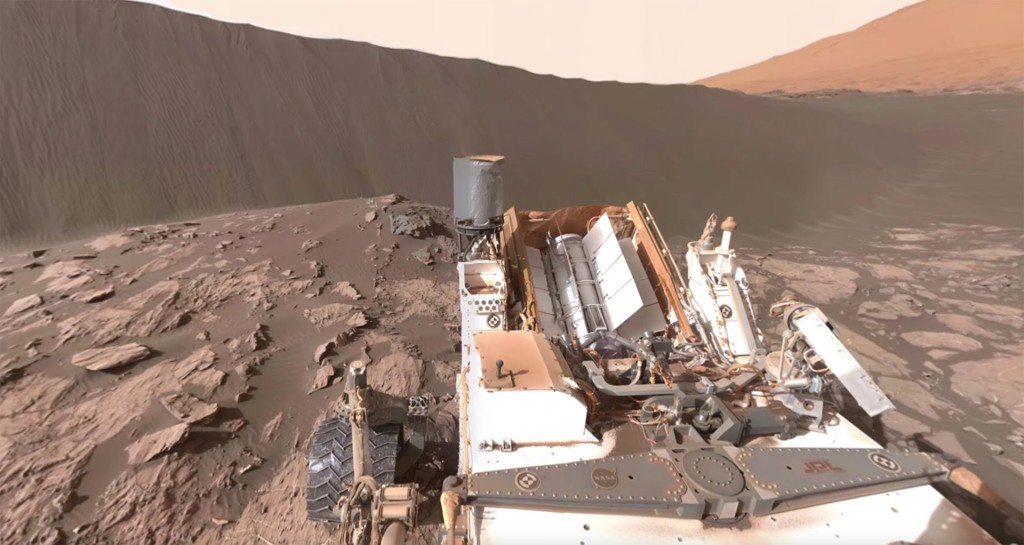 If we’re being realistic, most of us have the same odds of ever going to Mars as growing another limb. But in this tech era, visiting the Red Planet doesn’t have to involve a physical tour, and with NASA’ help, you can have the virtual tour of the Martian surface in 360-degree video.

The Jet Propulsion Laboratory has stitched up a pretty exciting video by gluing together images beamed on Earth by the Mars Curiosity Rover on December 18th, 2015. You can see the scenery at the Namib Dune with a view of Mount Sharp looming on the horizon.

Curiosity snapped the pictures on the 1,197th sol of its mission. A sol is a Martian day, and it lasts about 40 minutes longer than our Earth days.

For the best viewing experience, open the video on the mobile YouTube app, and then move around your smartphone to get a high quality 360-degree look at Curiosity’s Martian surroundings.

NASA has actually released the first version of this video on January 30th on Facebook, but there were some image bugs that needed fixing. Due to the way the pictures were stitched together to form the video, the horizon seemed warped and the panoramic image was somewhat confusing.

However, today’s release offers a huge improvement and a cleaner virtual experience. But it’s not the first time Curiosity’s photographs were turned into a 360-degree image. A similar panoramic was released by NASA in 2012, giving us a brief look at a Curiosity site.

Keeping in line with its famous habit, NASA has also released another “rover selfie” snapped with the help of another one of Curiosity’s cameras. A single scene of the video is generated by combining 57 different images provided by Curiosity’s Mars Hand Lens Imager.

Curiosity rover has been equipped with 17 cameras in total, which help with hazard avoidance, navigation, and scientific research. Its mission as NASA’s largest Mars rover started on August 6th, 2012, when it landed on Mars via a sky-crane.

The rover’s main purpose is to assess whether the Martian environment has ever supported life. Scientists are looking for liquid water, a key ingredient for life as we know it, and an indicator that Mars currently supports – or has ever supported – life.

Curiosity’s science team is rather intrigued by the rover’s discoveries and is trying a couple different hypotheses to unravel the mystery of Mars’ history. But until they have a clearer perspective, we can at least look at the 360-degree video of the Red Planet.
Image Source: YouTube