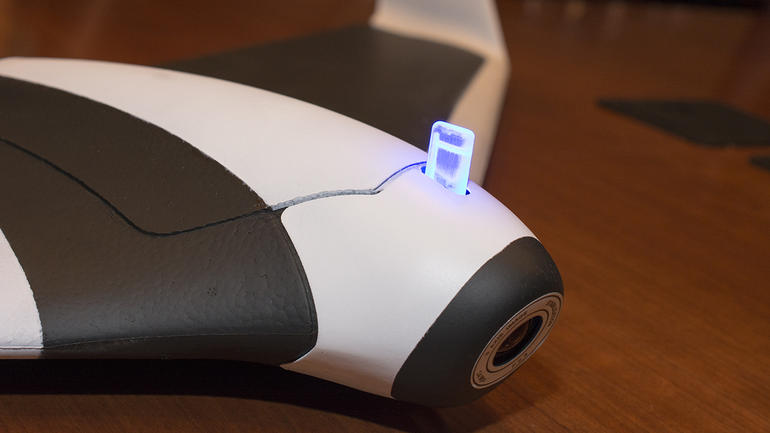 When people think of consumer drones, they’re most likely imagining a quadcopter. That is mostly because fixed-wing drones have long been linked strictly to the military and the model aircraft community.

However, Parrot – the same company that sparked the quadcopter craze – is set to change the rules a bit and take its fair share of the fixed-wing game, too. Meet the tiny 700-gram Parrot Disco do, a project that’s been in the making for the past two years.

It looks a lot like a model airplane and yet it’s just a small fixed-wing consumer drone that can fly for as long as 45 minutes and reach speeds of 50 mph. If you’ve seen the 1080p 14-megapixel camera of the Bebop 2 quadcopter, Parrot has equipped the front of the new drone with the same one.

Similar to Parrot’s other drones, the Disco is also controlled via Wi-Fi thanks to the FreeFlight app available for smartphone and tablet. But the Skycontroller is the one the team recommends, Parrot’s more professional toy.

Presented at the Consumer Electronics Show this year, Disco’s insides were revealed, as well. It’s got all the standard sensors you’d expect to see in a drone: a gyroscope, accelerometer, barometer, magnetometer, and GPS.

Even though the Disco has some competition in the market of fixed-wing consumer drones, the Parrot team has made it clear that flying the Disco is much simpler than any other drone. Airspeed is measured with the help of a pitot tube, used to keep the plane in air.

Some of the competition’s fixed-wing models require users to manually set the pitch and yaw, but the Disco will quickly become popular thanks to its simple take off technique: a quick shake and a toss will get Disco going.

Similar to any other plane, landing is probably the most complicated part of dealing with a fixed-wing model aircraft. But the Parrot team revealed the Disco will be equipped with an auto-land mode: the plane flies back slowly to its take-off point where it slowly circles to land.

Some of the autopilot software integrated in the Disco comes from senseFly, a company Parrot acquired in 2012 for its technology in mapping and other professional applications for fixed-wing drones.

Although the device is still a mere prototype, Parrot has assured us the Disco will land in the consumers’ hands by the end of 2016. As far as price is concerned, Parrot has yet to give us any hints.
Image Source: CNET