You are here: Home / Technology / Pac-Man Craft to Be Sent after Space Ghosts 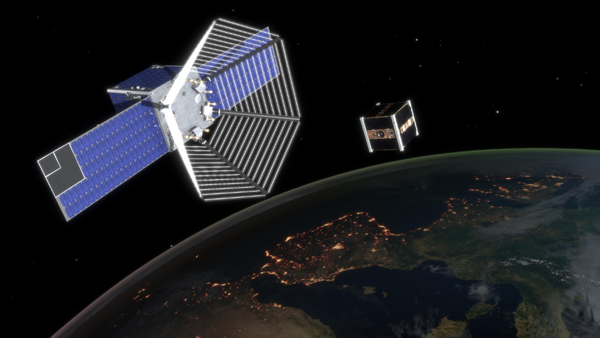 CleanSpace One preparing to eat up the small SwissCube.

It’s no secret that the space zone surrounding Earth has become over-run with man-made devices. But a few scientists have been working on Pac-Man craft to be sent after space ghosts that eerily orbit the Earth, looking for something valuable to hit and destroy.

These catastrophes waiting to happen are circling the planet at speeds of up to 22 thousand miles per hour. You can see why they are a problem. Not only that, but there are close to 370 thousand of these small pieces of space junk, 22 thousand of which are greater than four inches, and could cause serious harm if they were to hit any working device orbiting our planet.

53 years ago, Sputnik One was sent out into the great unknown. Today, we have one to many devices which have invaded and corrupted this unknown. The main source of space garbage is defunct satellites, shrapnel from projectiles like missiles, or old rockets. Also, a big debris source was the testing of weapons meant to destroy satellites. These tests were carried out during the `60s and `70s, both by the USSR and the US.

In light of all this, and to prevent further polluting our planet’s orbit, scientists have come up with the CleanSpace One project. The work has been going on for five years and will have, as a final goal, destroying a deactivated small Swiss satellite called SwissCube.

To be able to catch the satellite, the CleanSpace One craft will use a net                to capture the ghostly cube, after which it will close the net. After capture, it will set a course for Earth, in a kamikaze mission that will, logically, destroy both the cube and the giant Pac-Man.

Sorry to those of you who were keen on having a video game character high up there, hunting for junk. This is a one-time mission.

There will be a need for precision in the whole process, as SwissCube is just 4 inch – well – cube, but it’s tough to grasp, and it has lighter and darker parts, which reflect sunlight differently. Therefore, the net seemed the obvious solution. With as big an aperture as can be provided, the net will extend as it reaches the cube, trap it inside, and then close so as to not permit it to escape.

This new idea that is being worked on by students and teachers from a good number of European universities could be a model for future endeavors to clean up our back yard.