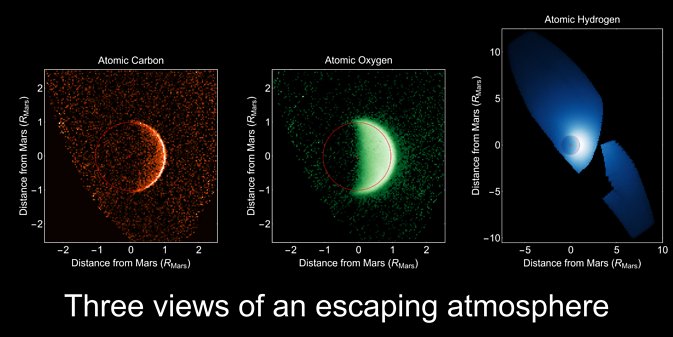 Mars Atmosphere and Volatile Evolution (MAVEN) already provides exciting data. NASA launched the Mars probe on November 18, 2013. On September 22, 2014, less than a year after, MAVEN reached the red planet’s orbit after a 442 million miles long journey. The latest NASA spacecraft was send with one primary purpose. MAVEN will analyze the upper Martian atmosphere for traces of water.

Curiosity rover is doing a great job on Mars. NASA’s most evolved robot sent to analyze the Martian soil already exceeded its initial lifespan, while just beginning the mission’s main scientific project. Curiosity started drilling Mount Sharp at the end of September. As the rover climbs the 3.5 miles high mountain, it may provide some of the most surprising discoveries.

While Curiosity drills Martian rocks, MAVEN will provide data as well to help scientists understand what happened on Mars roughly 3.7 billion years ago that turned the planet into the present desert.

Until then, MAVEN had the chance to witness a solar storm that hit Mars at the end of September and sent useful images back home. As the probe still calibrates its instruments, the images are almost an unexpected gift.

Justin Deighan is a researcher at the University of Colorado at Boulder. Deighan is a main MAVEN scientist and he operates the Imaging Ultraviolet Spectrograph. “The quality of the data is better than we were expecting,” Deighan said. “The ability to see that high-altitude oxygen – we were hoping for it, but we could never have guessed how good that picture would come out,” he added.

On September 30, a major solar event took place. Our star ejected a large mass of its corona and waves of energy hit Mars. The event may turn out to be one important factor explaining how the Martian atmosphere got thinner and thinner over time. The repetition of the event may have caused water to vanish from Mars, as it forces water molecules to break down. Hydrogen atoms can easily escape the upper atmosphere, as they are too light enough for gravity to lose its grip, Mike Chaffin, a University of Colorado scientist working on MAVEN, said during the press conference when the images were presented.

MAVEN will start taking more precise images starting with November. Scientists expect to use the data provided by the probe to come up with a historical model of how water vanished from the planet.