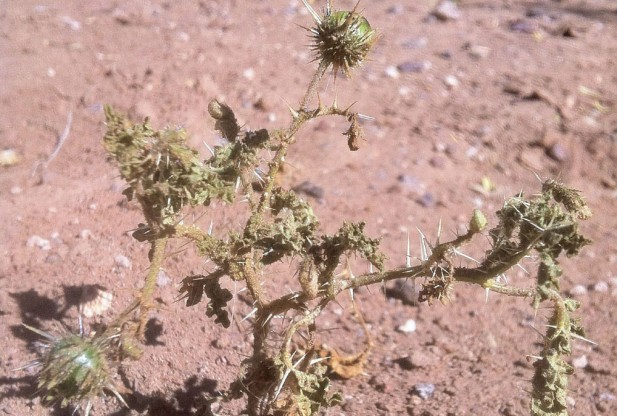 A new plant has been discovered in Texas’s small town, Valentine. It may not be exactly your garden-variety ornamental, but the plant has an incredible story to tell. According to the Forth Worth Star-Telegram, the specimen is a distant relative of the eggplant which has already been discovered once in 1974 and another time in 1990, but was misidentified.

Four decades later, the 14-inch plant was once again identified wrongly as one species, then a second, then a third. Recently, a group of University of Utah botanists set out to find this endangered plant once again. They also gave it a name: the Solanum Cordicitum, which means “from the heart” in Latin. The name is a direct reference to Valentine, the 134 residents town where it was discovered, in November, by Jeffrey Keeling.

This discovery is extremely interesting, especially since most new plant specimens appear at the tropics. It is extremely unusual for a flowering plant to be found in the United States, Lynn Bohs, biology professor at the University of Utah, declares. Lynn Bohs is also the senior author of a study called Solanum Cordicitum.

“It’s a new, unique plant from the united States (…) Plus it’s from Valentine, which is extremely charming, and that gave rise to its name, S. cordicitum.” – Lynn

At the moment there are only three specimens of S. cordicitum preserved. All of them have been pressed and mounted in museums. Scientists say that these are the only specimens they found of the plant, and since it is endangered, there may very well be no others. The name of the plant is also not a coincidence. It belongs to the genus Solanum, which includes approximately 1500 species of the most poisonous plants (like nightshades) and regular plants (like tomatoes, potatoes, eggplants etc.).

The vast majority of Solanum plants are extremely toxic and dangerous. They can cause hallucinogenic effects, or medicinal benefits. Although the International Union for the Conservation of Nature’s Red List (for threatened species) identified the newly discovered plant as “data efficient”, Bohs believes that it is extremely endangered.

More Details about the Plant

As we already mentioned, the plant is very similar to others of its kind. In addition to this, other plants found in the area are perennials, while the Solanum Cordicitum is annual. This means that it blossoms once and dies, so it is extremely hard to find. It can grow approximately 14 inches tall. It has unusual stems and leaves: each of them has 3 or 4 lobes on every side. They are covered with short hairs and spines that are 1/5 inches long.

This research is part of a larger, five-year project (valued at 4.36$ million by national Science Foundation) and it aims to better classify and organize all 1500 species in the genus of flowering plants.