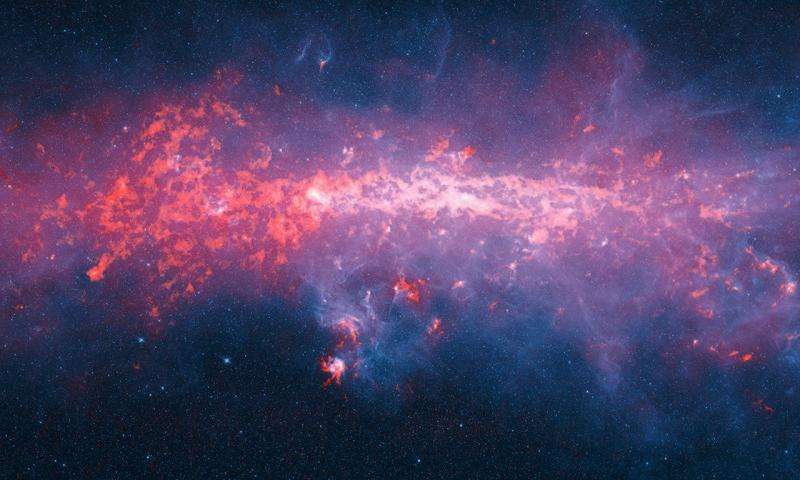 We have a new map of the Milky Way as astronomers have completed a detailed image of how the very dense, very cold gas which makes up starts is distributed across our galaxy.

Studying the space from an altitude of 5,100m in the Atacama Desert, the Apex telescope is the most able to provide us with an image that covers this much of the Milky Way.

Apex used radiation to sample the wide, thin strip of the southern sky, the kind of radiation that’s somewhere in between radio and infrared waves. The telescope’s detector is in fact one giant, highly sensitive, über-chilled thermometer.

A suite of 295 sensors are in charge with registering any tiny change in temperature as they are kept at less than 0.3 degrees above absolute zero; this instrument is called the Large Bolometer Camera.

Located at the heart of Apex, the Atacama Pathfinder Experiment is a 12m telescope that has operated for the past 10 years on the high Chajnantor Plateau in Chile.

Named ATLASGAL (Apex Telescope Large Area Survey of the Galaxy – a long acronym), the map has already been cited in more than 70 scientific papers since its first big set of data was unveiled in 2009.

This newly released map spans over an area 140 degrees long and 3 degrees wide, which is more than four times the previous version; it’s also a lot more precise with far more details.

According to Timea Csengeri from the Max Planck Institute for Radio Astronomy, Germany, “ALTASGAL provides exciting insights into where the next generation of high-mass stars and clusters form.”

This survey overlays perfectly on the existing data on the northern strip of the Milky Way that astronomers have previously collected with other telescopes. However, the southern view of our galaxy is the one stealing the show this time, as scientists are particularly interested in the galactic center located there.

The data coming from the ATLASGAL was combined with data from two other space telescopes, Planck and Spitzer. The final result of superimposing these different layers features a huge, downloadable image.

The ATLASGAL data is the one represented in red, the Spitzer measurements in blue, and the Plank data in fainter red. Leonardo Testi from the European Southern Observatory said this new map gives astronomers a “transformational look at the dense interstellar medium of our own galaxy.”

A lot of scientific teams are already using the data provided by the ATLASGAL to plan for a detailed follow-up.
Image Source: Phys.org