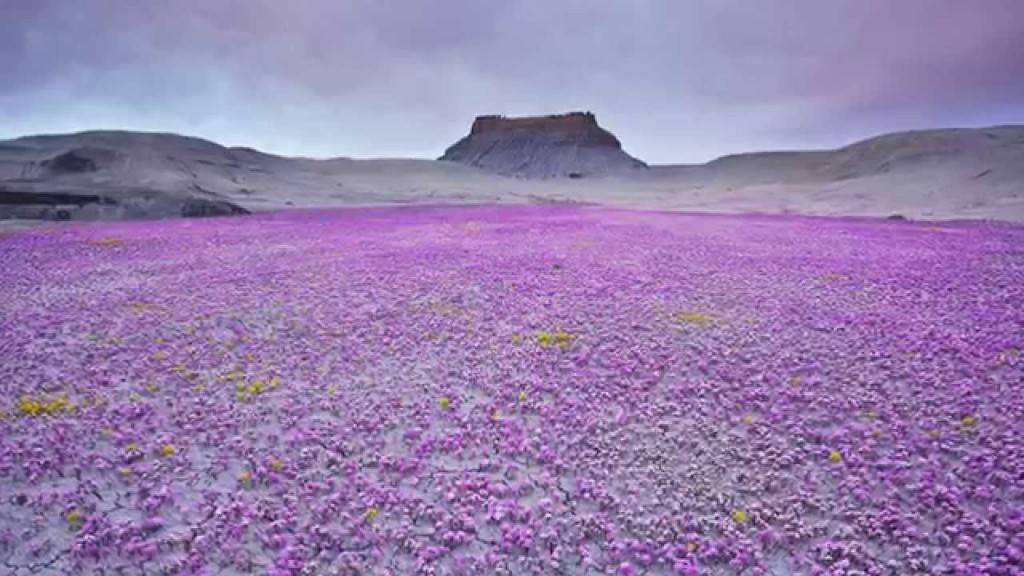 Atacama is covered in pretty purple and pink

The Beast is also the Beauty in this case, giving us the chance to see a beautiful sight, as furious El Nino covers Atacama in pink flowers.

El Nino is a hurricane that happens once every two to seven years. As any other hurricane, it is particularly damaging and distressing to both man and nature.

However, scientists have observed a beautiful side to this beast as well, when El Nino managed to cover the Atacama desert, the driest place in the world, in a carpet of delicate flowers.

Normally, the scenery in Atacama is very desolate, the temperatures reaching 40 degrees Celsius allowing almost nothing to grow here. But not now. Thousands of species of flowers can be seen this time of year in the Atacama desert, in brilliant shades of pink, purple, red and yellow, and all thanks to El Nino.

The reason behind this is that, this time, the hurricane has produced vast quantities of rain which he has dropped over the Atacama. This is what sprouted the germs and seeds lying dormant just under the surface to come to life virtually in an explosion of flowers.

As one scientist explains to us, even though when people usually think of the desert they think about a very dry and dead land, the truth is that just below the surface an entire ecosystem sleeps, and it’s just waiting for the right conditions to pop up. And now it did. Just like Sleeping Beauty was awoken from her sleep by the Prince’s kiss, so did the entire population of flowers rise to meet the sun and the rain in the Atacama desert.

Even more interesting is the fact that this is the third time this year that these flowers are blooming. They were first in bloom in the winter and scientists say that this has never been recorded before. After that, they bloomed for a second time in March, after a very heavy rain that produced a massive flood which killed 30 people. It looks like El Nino is trying to compensate now, by giving us 3 different sets of blooming flowers, amazing to behold.

The Atacama desert has recorded a 40 per cent rise in the tourist stream since the flowers have bloomed, because everybody wants to see this miracle of nature. It  just goes to show that every cloud has a silver lining or that even the most furious ones have a softer side.