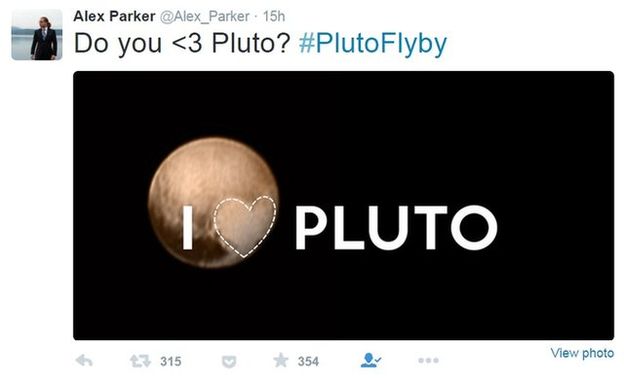 NASA will study Pluto’s formations next Tuesday, on July 14.

The Internet has gone into a frenzy as NASA tweets pic of Pluto’s heart. The first close-up images that New Horizon has managed to capture display two oddly-shaped features of the planet, namely, the “whale” and “Pluto’s heart”.

New Horizon has finally got close enough to Pluto to better observe its surface. As the satellite gets closer to the celestial body, many more interesting pictures get revealed by the National Aeronautics and Space Administration.

On Tuesday morning, NASA tweeted the first romantic image of Pluto proving once again why the space has always inspired the greatest love stories. The data processing analyses indicate that the heart-shaped image is 1,200 miles, that is, 2,000 kilometers wide. However, New Horizon has to get closer to the dwarf planet in order for the administration to unravel its mystery.

The heart-shaped formation is continued in the left side by another dark shape. Scientists have named it the “whale” due to its shape, which recalls the fish fins and the tale of a whale. The Ecuador-based “whale” appears to be even larger than the “heart”, having a diameter of approximately 1,860 miles (3,000 kilometers).

The top area of the dwarf planet is brighter than the Ecuador regions; therefore, researchers think great discoveries can be achieved through a closer study. So far, they have only concluded that the top area of Pluto is a polar region; hence, its brighter color.

The next time scientists will be able to get a closer look at these formations will be on July 14, that is, next Tuesday. According to NASA, the images will be 500 times bigger than they currently are, so they expect to notice many more surface details.

The images will be captured by New Horizon’s camera, Lorri. Scientists declared that they are generally satisfied with the quality of the images, even though they remain somewhat blurry. The camera experienced some difficulties on Sunday, when it was momentarily stopped, but the problem has been immediately solved and now the camera is fully functional.