You are here: Home / Technology / Fuhu’s Giant 24-inch Tablet Will Give Children More Screen time Together

Tablets for kids are useful, but it is difficult to compare them with iPads or other advanced tablets that offer more than enough games, interactive books and apps. At the moment there are dozens of brightly colored rablets like Kurio, Orbo, Meep or Tabby which are protected by rubber bumpers. Recently, Fuhu has released a giant tablet, the Nabi Big Tab 24, a device the size of a small screen that children can share. It promises to bring engagement in the household (siblings and parents can all join in on the activities). But is the 530$ tablet worth it, even if it lacks mobility? 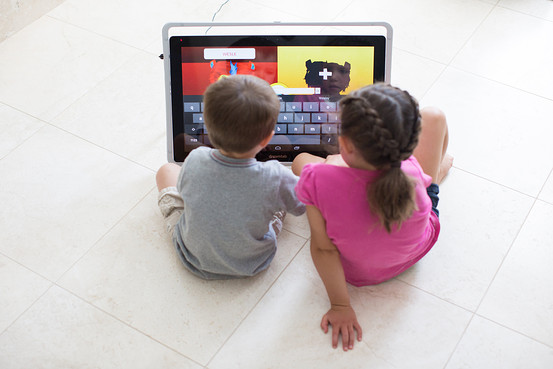 Granted, a 24-inch tablet may sound like an oxymoron, because it is “basically an iMac”, according to some voices, but it runs on Android. It also comes equipped with a 1080p high-definition capacitive touch screen that can register 15 simultaneous finger taps (this means that it is perfect for multi-player games. Its built in battery may not last more than half an hour, but this is more than enough time to move the tablet from a room to the other.

One thing that parents will like is the reasonable cost. The Nabi Big Tab 24 only costs 530$, and compared to an entry-level iPad Air, that is not a lot. It appears that the company will also be selling a slightly smaller Nabi Tab. It will be 20-inches and cost 450$.

A large tablet completely changes the dynamic in the house, especially if you have two children of similar ages. They can play together, bond, and really connect through the new technology. The 24-inch Big Tablet lets children do all sorts of things together. For example, they can play “Fruit Ninja”, draw, play family board games like Candyland or Chutes and Ladders.

“Cooperation is much harder than competition, especially for young kids (…) they are very focused on themselves.” – Seeta Pai, VP of research and digital content at common Sense Media

Yet with the Big tablet it is possible to cooperate harmoniously because both players are struggling for the same end effort. Even if you have two players on one tablet, it is the same tablet. This means that the only way to win is to work together.

Jim Mitchell, Fuhu’s CEO also stated that the company focuses on creative good software that will differentiate their tablets from candy-colored knockoffs that are ruining digital experiences.

“We’re focused on creating an innovative and immersive experience. Parents don’t buy tablets based on speeds and feeds. They say they want the tablet because it has all of these great characters and experiences.”

Due to its complex software and high-quality components, the Fuhu tablets may very well win over teens and entire families.