The US space agency NASA has released a new supercomputer simulation that showcases two neutron stars colliding and merging with each other to produce a black hole.

The video was produced by Goddard Space Flight Center of NASA.

The simulation covers the most violent events in the universe only 20 milliseconds in length. The event begins with two neutron stars – one bigger than the other – spiraling toward each other.

The neutron stars, which are the remains of supernova explosions, contain about 1.5 times the mass of the Sun. It is equivalent to about half a million Earths, according to NASA. 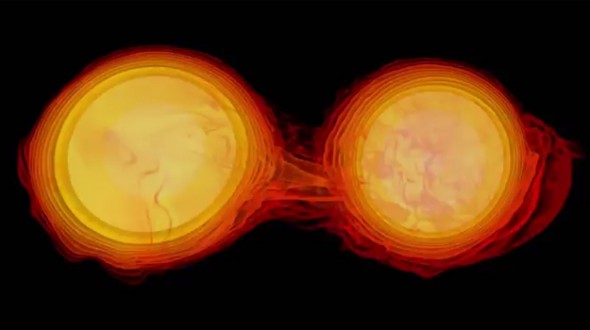 In a statement, NASA said, “At 13 milliseconds, the more massive star has accumulated too much mass to support it against gravity and collapses, and a new black hole is born. The black hole’s event horizon — its point of no return — is shown by the gray sphere. While most of the matter from both neutron stars will fall into the black hole, some of the less dense, faster moving matter manages to orbit around it, quickly forming a large and rapidly rotating torus.”

According to NASA, scientists believe such mergers produce short gamma-ray bursts that last less than two seconds. They say the merger has the power to emit as much energy as all the stars in our galaxy create in one year.