You are here: Home / Archives for Goddard Space Flight Center

NASA announced that Dawn spacecraft has successfully managed to map dwarf planet Ceres’ dimly lit portions where scientists believe that there could be several ice deposits within billion-year-old craters. Researchers explained that Ceres’s has some spots that it are permanently enshrouded in darkness, and temperatures can sink way below the permanently shadowed regions of the Moon or planet … END_OF_DOCUMENT_TOKEN_TO_BE_REPLACED 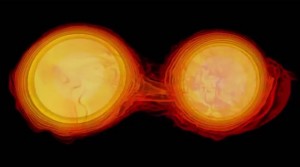 The US space agency NASA has released a new supercomputer simulation that showcases two neutron stars colliding and merging with each other to produce a black hole. The video was produced by Goddard Space Flight Center of NASA. The simulation covers the most violent events in the universe only 20 milliseconds in length. The event begins with two neutron stars – one bigger than the other – … END_OF_DOCUMENT_TOKEN_TO_BE_REPLACED