You are here: Home / Technology / Flappy Bird Phones Cannot be Sold on eBay

Flappy Bird game had become an instant success though we all are aware of its developer pulling it off Google Play store suddenly. With that news came lot of offers on eBay with phones loaded with the game and up for sale at astonishing prices of $100,000. While the numbers of such sales have been quite a few, eBay themselves have been acting watch dog and banning many of these offers as it infringes with their copyright policy. eBay has a rule that any app must be sold only with the express permission of its original developer. In this case Dong Nguyen would be required to give this permission. In addition the huge price being tagged with the sets is also a no go so far as eBay goes.

eBay clarifies in their marketing policy that any smartphone or tablet that is being sold through eBay needs to be reset to factory settings. They have also specified that the game Flappy Bird needs to be removed from the device prior to putting it up for sale. They warn violations of these terms would lead to suspension of the account of the violator. 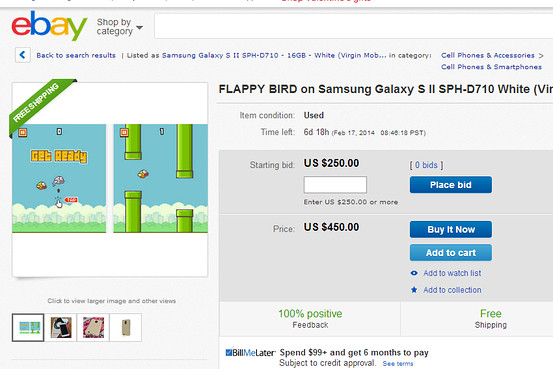 While eBay has put a stop for those looking to make a quick six figure profit, there is Amazon which has phones with the game installed on it up for sale. Though the price is not so exorbitant but yet needs to be checked.

The game is addictive and with the withdrawal and all the talk about it going on there would be further interest by way of intrigue added to the game. Such people who would be feeling quite frustrated at not being able to get their hand on the game and also the cost of $100,000 being quite prohibitive could also try the process of locating the APK file of the game on the net and installing it on their device.