You are here: Home / Science / Nanoflares on the Solar Corona Layer Keep Its Temperature High 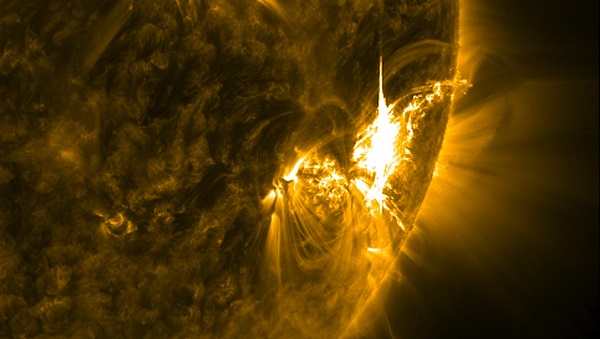 Nanoflares heat up the outermost layer of the sun

The Sun’s layers are a bit unusual, since the outermost one can reach temperatures higher than those of the two middle layers put together, and only the core can exceed it. This layer, called corona, kept baffling scientists for a long period of time, but they might have finally managed to find an explanation. The answer might be lying in a phenomenon incredibly hard to spot from Earth.

Solar flares lead to high temperatures in the solar corona

With the help of the high-tech instrument FOXSI (Focusing Optics X-Ray Solar Imager), scientists might have found the thing that drives the huge temperatures from the coronal layer of the Sun. They suspect the tiny nanoflares have contributed to the fiery environment.

They have measured the average temperatures reached by the solar core, as well as the corona. The core usually reaches around 15 million degrees Celsius, while the corona’s temperature revolves around two million. However, certain areas of this outer layer can get really hot, and exceed 20 million degrees. These areas are called solar flares.

Nanoflares and huge temperatures can only coexist

Scientists combined the findings of the FOXSI instrument with those collected in the Hinode solar observatory. This is how they found out that the frequent occurrence of flares on the surface of the corona maintained its temperature close to the range of several millions. The FOXSI documented the presence of different types of X-rays on the corona, which are solid proof for the existence of nanoflares.

These kinds of X-rays can only be produced by solar material at incredibly high temperatures. Since the observations showed how they were spread all over the corona most of the time, it was revealed that they keep its temperature high. In fact, it’s a circle of life. The high temperature of the corona maintains the X-ray in the flares, while the flares keep the outer layer hot.
Image Source: Wikimedia Commons