You are here: Home / Science / Mysterious Alien Megastructure Dimming a Star Turns Out to Be a Dust Cloud 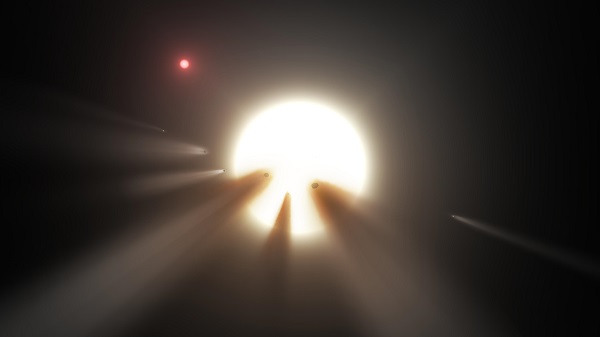 A few years ago, scientists discovered a star which exhibited a highly unusual behavior. The object, called Tabby’s Star, Boyajian’s Star or, by its scientific name, KIC 8462852, displayed a weird dimming which had lasted for quite a long period of time. Initially, researchers suspected the presence of an alien megastructure placed between the star and our planet. However, recent studies revealed it might have been just dust which blocked our view to the star.

Tabby’s Star is situated around 1,400 light-years away, and it came into the scientists’ attention a few years ago. They noticed a dimming effect around it, and suspected it might come from an alien megastructure built by some intelligent alien forces which surrounded it. There were other theories as well, which suggested the star ate an entire planet.

However, after further explorations, researchers managed to find the answer. It turns out the dimming doesn’t come from any aliens, but from a dust cloud which surrounds the star. They developed a study on this explanation, which was published in The Astrophysical Journal.

With the help of the Swift and Spitzer telescopes, scientists managed to observe some particles of dust orbiting around the star. These particles were big enough to be observed clearly and to resist space winds, but also small enough not to block the light completely.

However, Tabby’s Star preserves some secrets. Long-term dimming is, indeed, caused by the dust cloud orbiting around it, but the star sometimes experiences some instances of brightness. Between 2009 and 2013, the star was in a bright period, as well as since 2015 up until the present day. Therefore, researchers are still on the lookout for the complete explanation of this star’s weird behavior.
Image Source: NASA Jet Propulsion Laboratory