You are here: Home / Tech & Science / Life on Titan May Be Possible 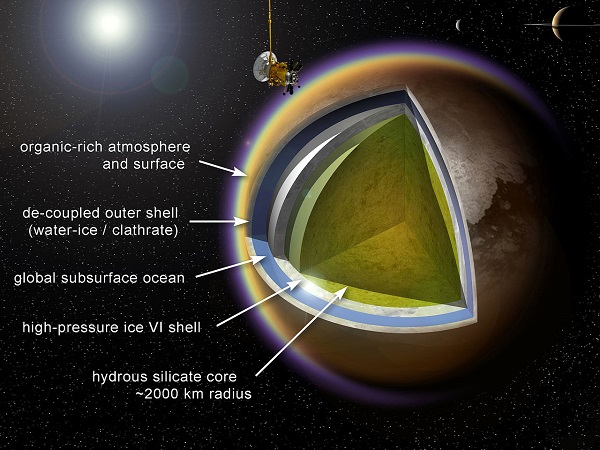 A new study shows that life on Titan may be possible. Saturn’s moon was targeted by scientists as a possible getaway destination for quite some time and now it seems that the natural satellite is capable of sustaining life.

Astronomers have been studying Titan, one of Saturn’s moons and Europa, one of Jupiter’s moons, for a long time. Both satellites are showing great potential in harboring human life in the near future.

Now, according to a paper that was recently published in the Proceedings of the National Academy of Sciences journal, a trip to Titan may be in the makings.

Using data gathered from the Cassini and Huygens missions, a team of researchers discovered that alien life might be already flourishing on Saturn’s moon. We’re not talking green slinky aliens, but even signs of prebiotic life are considered major discoveries.

Titan is the largest satellite revolving around the sixth planet in our solar system. Its terrain resembles that of Earth in the sense that there are lakes, rivers, and seas on the surface. As opposed to our planet where the seas and lakes are filled with water, Titan’s liquid bodies are filled with ethane and methane.

The moon also has a thick yellow haze atmosphere that is filled with nitrogen and methane. When the sun rays reach this toxic dense cloud, a chemical reaction takes place resulting in the creation of hydrogen cyanide.

Hydrogen cyanide is an essential organic chemical when it comes to the formation of polymers. One of the possible polymers on Titan’s surface may be polyimine, a very flexible chemical substance that allows various degrees of mobility even under the most frigid conditions. It is also able to absorb the sun’s energy, making the atmosphere suitable for sustaining life.

Martin Rahm, the lead author of the study and a chemistry postdoc researcher, declared that these new findings might be the starting point in a completely new branch of research, alien world prebiotic chemistry.

Rahm also said that scientists must be able to embrace a whole new approach to science if they want to make heads or tails of Saturn’s moon. Life on Titan may be possible, but the astronomers must first shed their rooted understanding of chemistry and how life evolved before reaching for the stars, or in this case, the ringed planet’s largest satellite.