You are here: Home / Tech & Science / Stunning Image Captured Fish Peering Out From Inside a Jellyfish 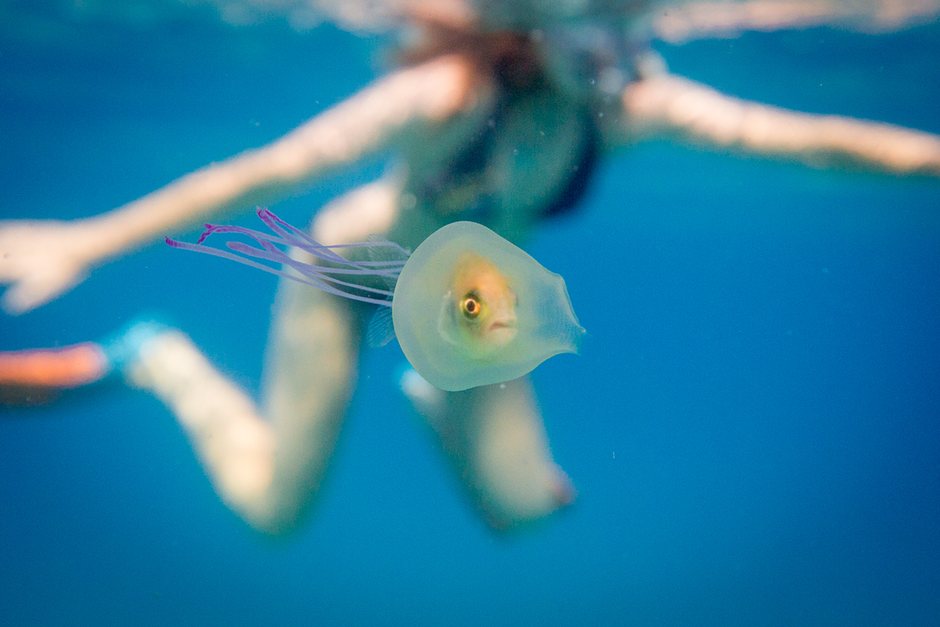 Do you think you’re having a bad day? Sometimes, it helps to cheer you up when you see that someone else has it worse than you. Today, we present you a picture of this little fish that apparently got stuck inside of a jellyfish.

And before we say anything else, just look at it. Even when they swim freely, fish look like they are screaming for help, but this little buddy looks so much so.

The image – and more – was captured by an Australian ocean photographer, and it features a one-in-a-million example of animals are often victims of cruelty in the deep. It’s somehow chilling to look at this fish peering out into the ocean: helpless, trapped inside a jellyfish.

Tim Samuel, the photographer, is a self-described “ocean obsessed… lover of photography and adventures.” These mesmerizing images were captured off Pass Beach in Byron Bay, Australia.

He first posted the image on his Instagram account, all the way back in December 2015. However, the photo was republished this week on a popular Instagram account, called DiscoverOcean, which propelled it into the international spotlight.

“I found a fish inside a jellyfish! He was trapped in there, but controlled where the jellyfish was moving,” is the caption of Samuel’s original Instagram photo.

Same came across the unusual sight one morning when he was free diving off The Pass in Byron Bay. He was hoping to capture some turtle shots on that day because there are lots of them at around this particular beach.

This is the first time Samuel has spotted something like this, and he has been a photographer for five years. He never saw this kind of behavior even during his other career as a surf instructor, which had him spending lots of time in the ocean nearly every day.

“I knew I had stumbled upon something pretty special, but I didn’t realize no one had photographed this behavior before, and I haven’t heard of anyone ever seeing this before,” he explained.

A second photo of the fish shows its wide eyes and a worried expression, as it tries to navigate its way through the ocean, still trapped inside the jellyfish.

So maybe next time you’re having a terrible day, you think of this unlucky fish and feel better.
Image Source: The Guardian