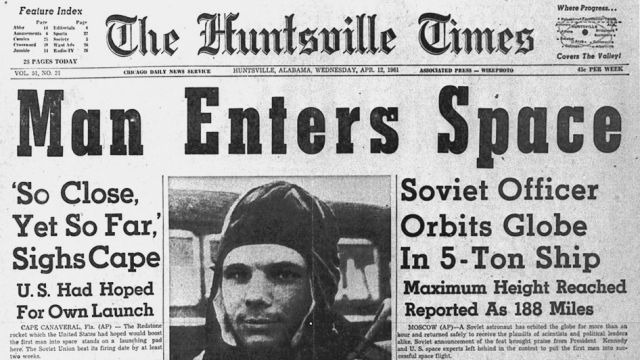 Today is an important day, marking 55 years since the first human went on a space trip. On April 12, 1961, the Russian Space Agency sent Russian cosmonaut Yuri Gagarin on a historical 108-minute orbital flight aboard the Vostok 1 spacecraft.

Young Gagarin was only 27 when he made history, which has been celebrated every year since. His incredible space journey was recognized by the United Nations when it declared today the International Day of Human Space Flight.

His fame skyrocketed as he returned to Earth with his face plastered on the front page of newspapers around the globe. Gagarin was welcomed with a massive parade as he stood next to Nikita Khrushchev, Premier of the Communist Soviet Union.

But before the stardom, there was the historic mission. The cosmonaut was launched from the Baikonur space station at approximately 9 a.m. on the day of the launch aboard the Vostok 1.

He was the first human – as far as we know – who stared down at Earth, relying on a life-support system, some radios, and an ejection seat to keep him safe during his journey and bring him back on Earth.

After one complete orbit around our planet and 1 hour and 28 minutes from the initial launch, Vostok 1 was already descending and landing in Kazakhstan.

But in spite of the fact that Gagarin soon became the propaganda puppet of the Soviet Union, he didn’t enjoy his fame for long. The Russian cosmonaut died quickly and in a controversial accident at only the age of 34.

On March 27, 1968, just seven years after his space mission, Gagarin died on a routine test flight of a MiG-15 fighter. He and his co-pilot were both killed when the plane suddenly plummeted from 10,000 feet.

Conspiracy theories abounded: some said Gagarin was piloting while drunk on vodka while others claim the Soviet leader Leonid Brezhnev set him up. Reports of the time said Brezhnev wasn’t a big fan of the young cosmonaut.

Many have tried to explain Gagarin’s death. In 2010, Igor Kuznetsov, a retired Soviet air force colonel, talked about an open vent that forced Gagarin and his co-pilot to follow emergency procedures. As they descended to a safer altitude, the plane took a nose dive, crashing and killing the pilots.

But according to a 2013 interview of Y. Alexei Leonov, the first man to float in outer space, a report had surfaced that confirmed Gagarin’s plane had crashed due to an unauthorized jet flying dangerously close to him.

While many still wonder what really happened to cause the tragic death of the world’s very first space traveler, people still celebrate Gagarin’s accomplishments.
Image Source: Tale of Curiosity