You are here: Home / Tech & Science / Should We Use a Laser Defensive System to Hide Earth From ET? 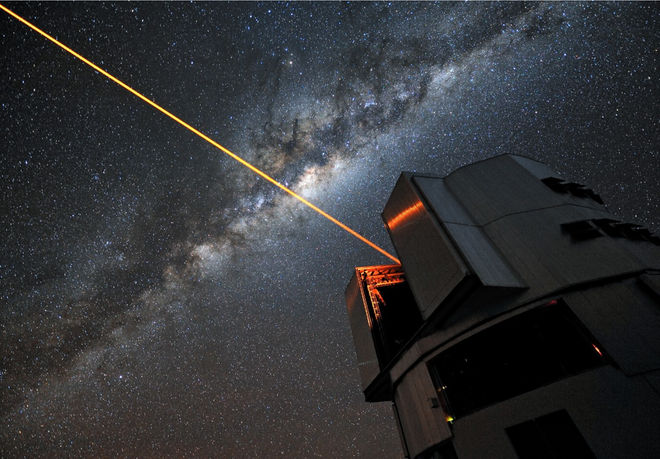 Let’s be honest: Planet Earth is pretty sweet, with its bountiful resources and balmy climate. But what would happen if aliens would find us? Aren’t we a little too exposed and defenseless in the face of a potential alien invasion?

Several scientists have long debated whether or not we should send messages in the universe, hoping we could find some intelligent life. But if they find us first, could we protect our planet from exploitation?

Not the least of them is physicist Stephen Hawking, who warned that ET and his friends may be not only more intelligent than us, but also more invasive (and we humans are pretty invasive as a species, too). They might see us as little more than troublesome bugs.

In response to the risen concerns, a duo of astronomers from Columbia University in New York has proposed we cloak our planet in a protective blanket of lasers. We should not be sitting ducks, vulnerable to prying extraterrestrial eyes, they said.

And if you’re wondering by now if this is an April Fool’s Day joke, they’ve assured the world they’re dead serious. David Kipping and Alex Teachey argue that aliens could be taking a page from our book and using the same technique we do in trying to find habitable planets.

When a planet transits in front of a star it orbits, telescopes can look for a slight variation in light. Since planets do not emit their own light, they’re rarely visible to the naked eye.

They’re also way too far away in space for us to be able to observe them, so our telescopes can only pick up a small decrease in the starlight emitted during transit.

If aliens exist and know about this technique, they would logically assume Earth is perfect for alien settlement. It also helps that the Blue Planet is smack right in the so-called “habitable zone” – not too close nor too far from the Sun – with an ideal temperature for water and life.

NASA’s Kepler exoplanet-hunting space telescope has been on the lookout since its launch in 2009 and has transmitted back tons of data about potential candidates.

Before we look for life outside our planet, Kipping and Teachey argue we should look for ways to protect what we have. A universal cloak that would be effective at all wavelengths would need a total output of 250 MW coming from a large array of lasers.

“Within the wavelength spectrum of visible light, the transit signal could be masked with a monochromatic laser emitting about 30 million watts (MW) for 10 hours at a time, once a year.”
Image Source: Space