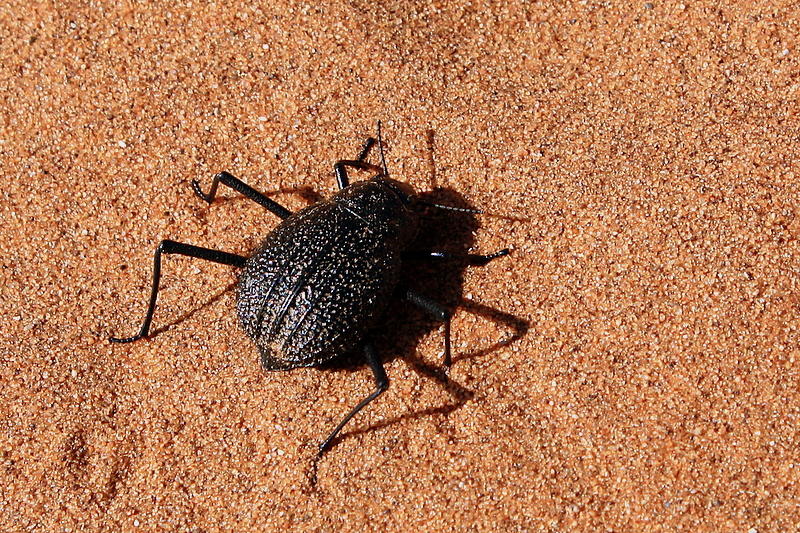 You wouldn’t think of looking at this species of desert beetle in southern Africa to find the secret to keeping your car windshields from freezing during this winter’s terrible snow storms.

However, a new study published in the journal Scientific Reports has discovered an interesting behavior in the Namib Desert beetles that could help researchers find a way to keep airplane parts in good condition even in extreme temperatures.

In the study, researchers from the Virginia Tech observed how the beetles – scientifically knows as sStenocara gracilipes – or fogstand beetles, collect airborne water to survive in one of the hottest place on Earth.

They found little ridges in the shell of the beetle which collect moisture, which then turns into little water droplets. Very cleverly, the sides of their shell are shaped is such a way that the resulted water is directly led into the mouths of the beetle.

This concept turned out to be an interesting source of inspiration for researchers. Mimicking the insect’s shell ridges, they developed a special pattern that can control frost.

What would otherwise be a smooth, water-repelling surface was thus transformed into a new material that recreated the water-absorbing properties of the beetle’s shell. Researchers used photolithography, a series of chemical treatments that use light to transfer a geometric pattern on a smooth surface.

When frost forms in nature, it’s usually because individual droplets of water freeze and become interconnected with other droplets freezing nearby. But if there was a way to keep them from connecting and confined separately, it would help prevent frost from forming.

One of the study’s authors, Jonathan Boreyko, is also an assistant professor of biomedical engineering and mechanics at Virginia Tech; he explained that fluids shift from high pressure to low pressure, and this difference is what causes ice to grow.

So if the beetle-inspired pattern would be exposed to similarly varying levels of pressures, it should create a dry zone instead of frost. During their experiments, Boreyko’s team was able to create a single dry zone surrounding a piece of ice.

Hydrophilic dots on the surface area encouraged the formation of dew drops, and spacing these dots far away from each other stopped the frozen dew drops to connect to other nearby drops. The evaporation of these isolated drops created dry zone around the ice.

So far, this new anti-frost technology was tested only on a small scale, but the researchers hope to eventually test it at industrial scales in the near future.
Image Source: Pbase