You are here: Home / Tech & Science / Homer Simpson Predicts the Mass of Higgs Boson in 1998 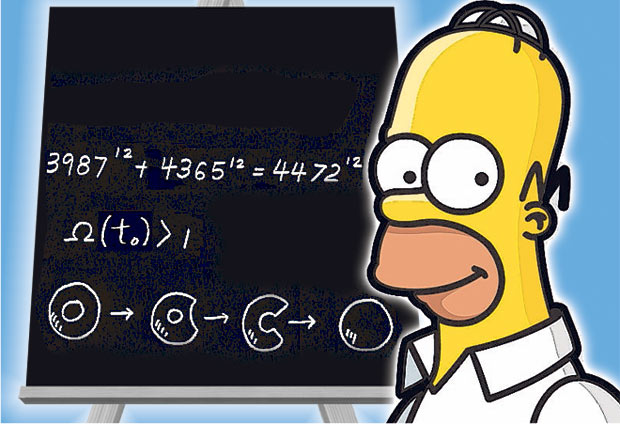 Homer Simpson is not the cartoon character you would expect to outwit some of the smartest people on the planet. He is better known for his doughnut obsession and his ability to use words that don’t exist in the English language.

However, it has been recently revealed that Homer Simpson predicts the mass of Higgs Boson, a particle discovered by physicists only 14 years later at the Large Hadron Collider in Cern.

The person to “blame” is Dr. Simon Singh, a renowned physicist and author who wrote the book on the math involved in the Simpson cartoons. He discovered the equation written on a blackboard in an episode released in 1998.

Dr. Singh gave an interview to the Independent, explaining that very same solution is the one used to predict the mass of the Higgs boson 14 years after that episode. He added that he recognized the math on the blackboard mostly because his first book dealt with Fermat’s Last Theorem, whose equations are related to Higgs boson.

Dr. Singh’s PhD is in particle physics, so we can only imagine his shock when he saw Homer standing in front of the equation on the blackboard predicting the mass of the Higgs boson.

What is the Higgs boson?

The Higgs boson particle was firstly introduced in 1964 by Professor Peter Higgs, a theoretical physicist at the University of Edinburgh working with five other physicists. It was also dubbed as “the God Particle”, because it played a significant part  in understanding the great wonder of the creation of the universe. Higgs boson was the missing piece that physicists needed in order to comprehend the engine of the universe.

The theory that was proposed in 1964 was later confirmed by scientists working at the Large Hadron Collider near Geneva. They attempted to recreate the exact conditions that existed before the Big Bang happened, so they collided beams of protons – also called “the hearts of atoms” – almost a the speed of light. The theory stated that they should leave a recognizable print before the rapid decay, which they did, as discovered in 2012.

Before March 2013, scientists could not provide proof that the Higgs particle existed. In theory, all subatomic particles interact within the Higgs field, giving them mass, and this energy field needed a corresponding particle – the Higgs boson.

But proof came when scientists built the world’s most massive atom collider called Large Hadron Collider. Using the atom collider, they could announce the discovery of a particle that matched the characteristics of the Higgs boson.

The experiment cost £8.6 billion ($13.25 billion), and the team of physicists at Cern, along with Higgs and his colleagues were all awarded with the Nobel Prize in Physics for their discovery and contribution to the field.

The brains behind Homer’s equation

Real science aside, it appears that the writers of the Simpsons are the first to successfully demonstrate the outcome 14 years earlier than any physicist. In his book, Dr. Singh claims that when Homer tries to create different wild inventions like an electric hammer or a make-up gun, he comes really close to the same equation.

The one responsible for writing the script for that episode was David X. Cohen, and he decided to sneak in some real mathematical equations onto the blackboard. Trying to be accurate, Cohen partnered with David Schiminovich, an astronomer at Columbia University. The equation was the result of the best data available at the time, combining the speed of light, the Planck constant, and the gravitational constant.

Homer’s equation predicts a mass of 775 giga-electron-volts (GeV), which is surprisingly close to the 125 GeV result, which was calculated after the Higgs boson was discovered in 2012. If you bear in mind that Homer is an amateur inventor and he overtook Cern physicists with 14 years, his estimate is pretty impressive.

The Simpson series is filled with numerous math jokes about mersenne primes and perfect numbers; it is quite interesting that the very first full episode included a witty a joke about calculus. In his book “The Simpsons and their Mathematical Secrets”, Dr. Singh calls The Simpsons “the most mathematical TV show on prime time television”.

The simple reason behind that is the fact that many members of the writing team were mathematicians themselves. Mr. Cohen, responsible for writing the Simpsons for the last five years, started as an eminent mathematician and studied physics at Harvard University. His love for sneaking mathematics into the TV series is widely known by now.

Dr. Singsh commended the use of maths in such a prolific cartoon, expressing his hope that more teenagers should be inspired to take an interest in the subject. The great team behind the show offers a great endorsement to the nerd culture, and it might persuade youngsters who spot maths in The Simpsons to think that maths is rightly cool.