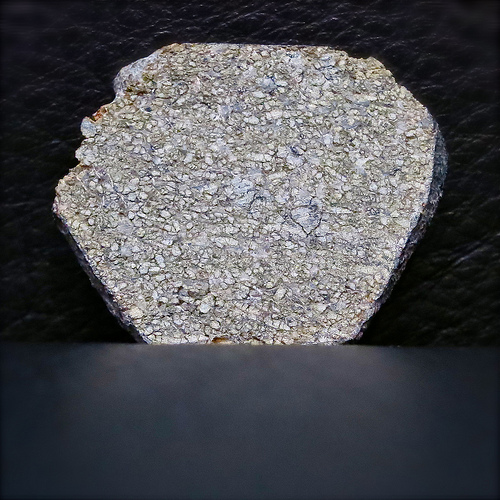 Recent measurements of the Black Beauty (or NWA 7034 meteorite) have led scientists to believe that the meteorite may stem from Mars. The Black Beauty was found in the Moroccan desert a few years back and ever since its discovery, experts knew that it’s unlike any rock found on our planet.

A new analysis accompanied by precise measurements suggests that the NWA 7034 is approximately 4.4 billion years old. Moreover, the same analysis showed that the mysterious Black Beauty could be a chunk of Mars’ crust, since all spectroscopic measurements matched those of Martian dark plains. This area displays a thin coating of red dust, leaving the rocks underneath exposed.

The paper in question was written by a Brown University graduate student, Kevin Cannon. According to his findings, the Black Beauty could be considered a representative of the “bulk background” of the Martian surface’s rocks.

It’s not only the Black Beauty’s unique color that led scientists to the idea that it had not originated from Earth. The specific chemical make-up of this unique rock made it clear that it was, indeed, a castaway from the Red Planet. Still, the Black Beauty was unlike other Martian meteorites.

Scientists have recovered other meteorites stemming from Mars, however, these are SNC meteorites (which were later classified as either shergottites, nakhlites, or chassignites).The composition of these meteorites includes cooled magma and volcanic material. This is precisely what sets the Black Beauty apart. As opposed to the volcanic composition of other Mars meteorites, the Black Beauty is comprised of a variety of different rocks tied together by basalt, making it a breccia.

The sedimentary make-up of this one-of-a-kind meteorite resembles the composition of rocks that the Mars rovers have studied all over Mars’ surface.

This discovery has cleared up two distinct uncertainties: on the one side, it’s clear that the NWA 7034 meteorite belongs to Mars’ crust. On the other hand, scientists now understand why other Martian meteorites seemed to have had different make-ups than those on the red planet itself.

In order to accurately measure the NWA 7034 meteorite, scientists at Brown University used spectroscopy in order to obtain full spectral images of the mysterious rock. The cutting-edge imaging system used by researchers allowed them to carefully evaluate the Black Beauty’s spectral signal.

“What we wanted to do was get an average for the entire sample. That overall measurement was what ended up matching the orbital data.”

The technique that Brown University researchers used involves a hyper-spectral imaging system that Massachusetts-based Headwall photonics developed. After establishing the spectral match, scientists could affirm that brecciated rocks dominate the Dark Plains, rocks much like the Black Beauty.

Cannon added that, if someone were to go and pick up chunks of rocks from the Dark Plains, these would most likely be battered, broken apart and put back together as a result of the planet’s many impacts.

“Brecciation is a natural consequence of impacts, it is expected that material similar to NWA 7034 has accumulated on Mars over time.”