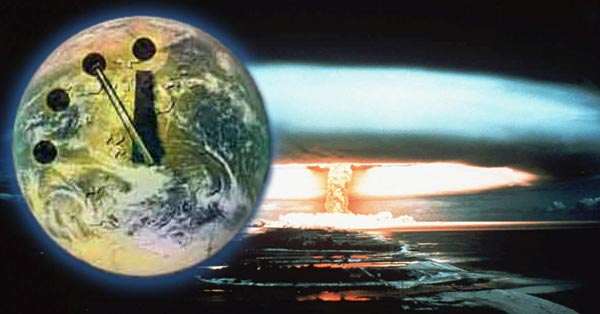 Earlier this week, the Bulletin of the Atomic Scientists’ board members decided to raise warning flags concerning the world’s nuclear arsenal situation as well as the lack of international involvement in the matter of climate change. They moved the minute hand of the Doomsday clock. Consequently, the Doomsday Clock now ticks 3 minutes closer to midnight, at 11:57 PM.

Apart from climate change and nuclear weapon proliferation, the Doomsday Clock also points to the potential risks that hacking and artificial intelligence might pose.

This controversial device was first revealed in 1947. Until now, the farthest that the Doomsday Clock has been from midnight was in 1991, when the Bulletin of the Atomic Scientists set it at 17 minutes. By contrast, in 1953, because of the many nuclear tests that the United States and the Soviet Union had been conducting, the clock was set at 2 minutes before midnight, making this the closest it has ever been to 12 o’clock.

The two main issues which caused this Doomsday Clock readjustment are seemingly unrelated, yet the Bulletin of Atomic Scientists warn that climate change and the world’s nuclear situation go hand in hand. According to them, in an effort to lower carbon emissions, many of the world’s nations turn their attention to nuclear power for fuel interests. Consequently, a nuclear war will be all the more likely in a situation where nuclear technology would become so ubiquitous.

“Stunning government failures have imperiled civilization on a global scale,”

Kennette Benedict, the executive director of the Bulletin of Atomic Scientists said.

The entire idea behind the Doomsday Clock was to provide humanity with a metaphor depicting the effects of their current direction. Rather than making real doomsday predictions, the clock merely offers the public a visual reminder, constantly warning the public about a potential civilization-destroying catastrophe. Yearly, the organization analyzes the possible threats faced by humankind and decide where the Doomsday Clock’s hands should be set.

There was a particular sense of urgency this year, the board said, because of the alarming rise in greenhouse gas emissions and the nations’ reluctance in enacting laws meant to reduce them. Additionally, there is also little effort to ensure a reduction in nuclear weaponry.

Kennette Benedict stated that the group does not believe that humanity is too late to take action in the matter, but they are convinced that the window of opportunity is swiftly closing.

“We move the clock hand currently to inspire action.”