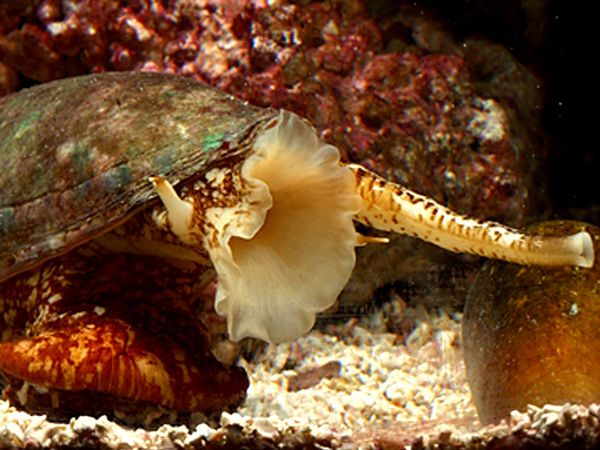 A new study revealed that cone snails attack their prey with a insulin venom, a venom that has very high doses of insulin in it. Cone snails are very slow-moving creatures and this is the main reason why they’ve developed such a complex and potent venom.

The insulin venom is used by cone snails on their prey, which is fish mostly. Previous studies have shown that cone snails have a very potent neurotoxin venom, but a new study published in the Proceedings of the National Academy of Sciences shows that insulin is also a key factor in their venom.

Two species of cone snail were found to produce a different type of insulin from the one they use to regulate their own blood sugar. The special insulin is very similar to the one produced by the fish that cone snails like to prey on. Their venom contains high doses of that insulin, which makes the cone snails very smart creatures from an evolutionary point of view.

Cone snails attack their prey with insulin venom, which causes the cells of the fish to over-absorb sugar from their bloodstream, causing the death of the fish, in rare cases. In most cases, the high levels of insulin in the venom sends the fish into hypoglycemic shock, which means that they become very lethargic, making them much easier to be preyed upon.

Zebrafish were injected with a synthetic copy of the insulin that the cone snails produce for their venom and the result was amazing: the zebrafish all experienced a drop in blood sugar and had clear symptoms of it.

But if these snails have such awesome venoms, they why do they need those powerful neurotoxins? Well, they need it to actually kill the prey after they have managed to wrap themselves around it. If cone snails did not have neurotoxins, then the fish would simply perk up, struggle and swim away after being caught by the snail.

This find is extremely important for science, as it is the first time ever, when insulin was found to be a component in animal venom.