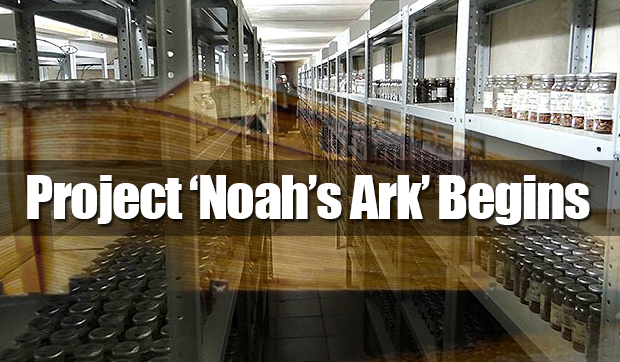 Science is taking a step forward as Russia sets to build worlds largest DNA storage of all living things.

The researchers from the Moscow State University in Russia have recently been granted to build the first DNA data bank of all living creatures on Earth, including disappearing or extinct ones. Scientists will gather genetic material which will be stored in the world’s largest depository. Russian news agency, TASS, announced that the project was named Noa’s Ark and received 1 billion roubles, the equivalent of US$194 million. The department of Research and Technology Valley of Moscow’s State University will take charge of the challenging project.

According to scientists involved in the project, the building of the depository where the DNA will be stored, should be completed by 2018. The huge “ark” will have a size of 430 square kilometres and the costs for the construction are reported to be around $19 million.

“It will have the facilities for cryogenic storage of the cell material samples with an opportunity to reproduce them in the future,” said MSU President, Dr. Viktor Sadovnichy.

Noa’s Ark is an innovation in the field of DNA banks, a domain which has been showing fast development and improvement in the last years.

Russia hasn’t been the first country attempting to set fro this experiment, as others have already engaged into preserving biological life forms, but at a smaller level.

The San Diego Zoo is presently the possessor of nearly 8,400 frozen DNA samples taken from over 800 species. The Frozen Ark Project from Britain is holding 28,604 frozen samples, out of which 7,000 belonging to “red alert” endangered species. Britain’s Frozen Ark Project is said to be equivalent of the Millennium Seed Bank, but for animals.

A research from September, published by the World Wildlife Fund and The Zoological Society of London, says that the number of wild animals in the world has decreased to half in the last forty years. The massive disappearance has mostly been caused by human activities, such as global pollution or destruction of the habitats.

According to Viktor Sadovnichy, if the project will turn to be a success, it will have a huge impact on Russian science, as it will become the first country in the world to create a modern DNA, version of Noa’s Ark.
Image Source: NOWTHEENDBEGINS