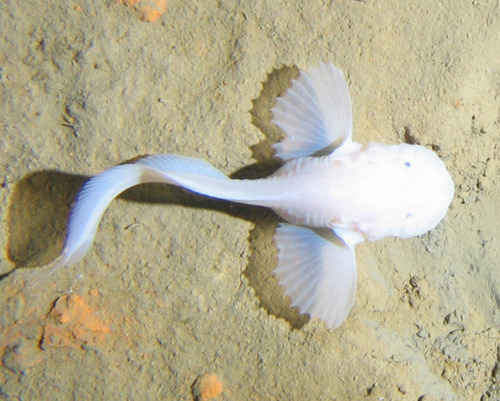 This week, the Schmidt Ocean Institute (SOI) reported that Falkor, its deep-sea expedition vessel, has found the deepest fish ever recorded, at 26,722 feet (8,145 m) beneath sea level. The strange looking white fish was spotted swimming in the Mariana Trench, a 7-miles-deep underwater canyon and Earth’s deepest place.

The previous record of the deepest fish on the planet was by almost 1,640 ft (500 m) short. SOI researchers also reported that during the expedition Falkor has recorded several other new species of underwater creatures such as giant shrimps and snailfish.

Falkor has explored the Mariana Trench for nearly one month. The information gathered about the fauna and rocks there is the most comprehensive data ever collected in such a remote place.

Many studies have rushed to the bottom of the trench, but from an ecological view that is very limiting. It’s like trying to understand a mountain ecosystem by only looking at its summit,”

Dr Jeff Drazen, researcher at the University of Hawaii, said:
Hadal Lander, the deepest diving vehicle made in UK, was able to gather about 100-hour of visual data from its deep-sea explorations.

Until Falkor’s dive, the deepest fish was recorded at about 25,000 ft (7,700 m) in the Japan Trench. The snailfish was gelatinous, pink and weird-looking.
The Falkor expedition team said that when they first found a snailfish at about 26,000 ft (8,000 meters) they thought they broke the world-record, but they saw another type of fish at 8,145 meters. The team thinks it is also a snailfish, but its looks are really weird.

It is unbelievably fragile, and when it swims, it looks like it has wet tissue paper floating behind it.And it has a weird snout – it looks like a cartoon dog snout,”

The team didn’t catch the fish so they couldn’t tell for sure if it was really a new species. However, deep-sea experts say that the fish caught on camera didn’t look like anything they had seen before.

Falkor has also caught some giant shrimps on camera – the supergiants. Scientists say that these animals are normally 2-3 cm long, but supergiants can grow up to 30 cm. SOI researchers said that they would use the 20 hours of footage of these creatures to find out how they fed and how they survived their predators.