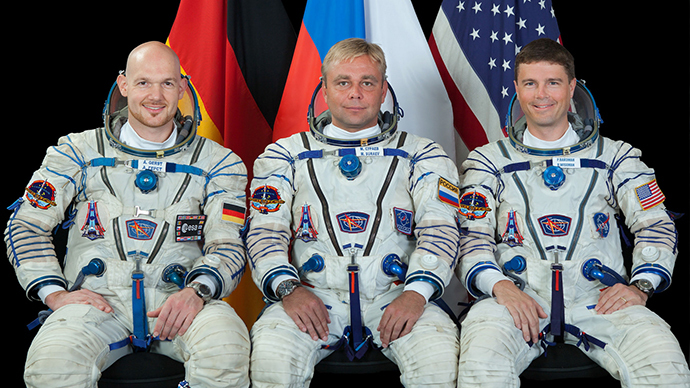 After spending five months on board the ISS, Russian cosmonaut Maxim Suraev, German volcanologist Alexander Gerst and U.S. astronaut Reid Wiseman returned on Earth. The Soyuz capsule landed in Kazakhstan, bringing the crew of three, as well as some fruit flies born in space, safely on ground.

The operation involved heavy logistical efforts. Around 300 military personnel located the capsule, while 14 helicopters, six complex terrain vehicles and one transport aircraft have been deployed in the operation.

During their 165 days on board, the crew orbited Earth 2,640 times before landing close to Arkalyk, Kazakhstan at 9:38 a.m. Monday local time. All three of them seemed to be in good shape. However, they had to be carried by ground personnel, because spending almost half a year in zero gravity weakens the muscles and bones.

“Here we have (Russia), Germany and the U.S., we’ve worked together for half a year,” Suraev said. “Everything was fine, everything was in the spirit of cooperation. So I think everybody needs to learn and follow the example of ISS crew members — don’t get insulted, don’t try to prove anything to each other, let’s try to live together, side by side.”

Fruit flies, scientifically known as Drosophila melanogaster, have been used to test the effects of microgravity on complex organisms, as they are good substitutes for humans. The fruit flies’ genetic model comes in handy during other experiments as well, including those oriented at understanding Parkinson’s disease.

Expedition 41 had one key objective, to provide data on health management during long space missions. Using the experience, both NASA and Roscosmos will prepare two crews to spend one full year on board of the ISS starting with 2015.

During their stay on the ISS, the crew received five cargo spacecraft. One of them brought a 3D printer on board, a technology that will revolutionize space laboratory work, as well as space exploration overall. The crew headed by Suraev managed to break the station’s record by performing 82 hours of experiments in one week in July.

Since the first crew arrived on the ISS in 2000, the orbiter has been permanently staffed. After veteran cosmonaut Maxim Suraev left the station, Nasa astronaut Barry ‘Butch’ Wilmore was named the new commander. Wilmor, Alexander Samokutyaev and Elena Serova will have the station to their own until November 23, when another crew of three arrives: cosmonaut Anton Shkaplerov, NASA astronaut Terry Virts and Italy’s Samantha Cristoforetti.