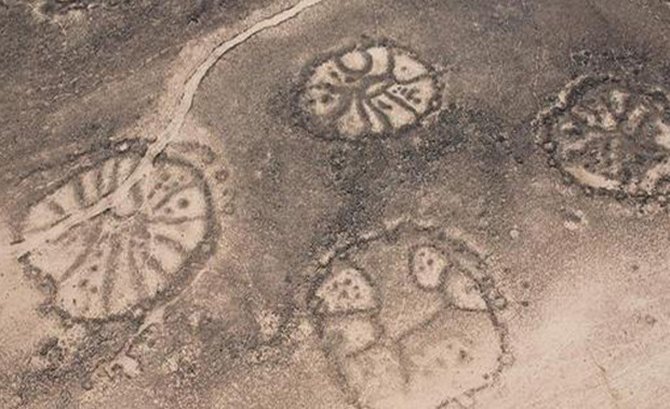 Enormous stone circles located in the Middle East have been photographed recently, revealing details of structures that have long baffled archaeologists.

In Jordan, archaeologists have taken high-resolution pictures of 11 such “Big Circles” which measure up to 1,312 feet in diameter. Researcher David Kennedy, who has been studying the unique circles believes that they are too similar to be a coincidence.

“As soon as you get up a few hundred feet, it all comes into focus. You can suddenly see the shape of what you’ve been looking at,”

These circles are built with low stone walls several feet high and originally contained no openings, so that anyone wanting to get inside would have to hop over the walls. Until now, archaeologists have not determined the purpose of these structures or the time when they were built. After analyzing the photographs taken of the structures, archaeologists said that the circles could date back at least 2,000 years. In fact, some scientists think that the structures might originate even before writing was invented.

The “Big Circles” were first discovered in the 1920’s by aircrafts flying over them, however, little research was conducted until now. David Kennedy, the scientist leading the research project studying these “Big Circles” said that very few scientists were even aware of the circle’s existence. Kennedy has been the head of the Aerial Archaeology in Jordan Project (AAJ) since 1997.

“The most important contribution is simply to collect and make known a large group of rather remarkable sites,”

Eleven circles were photographed, however, researchers identified an additional circle in Jordan which hasn’t been completed. Old Satellite images also show two circles, one in Jordan and one in Syria, however, these circles were destroyed.

According to Kennedy, the “Big Circle” in Syria was destroyed recently, and was studied by a separate research team from the Durham University before being completely gone.

Although the circles would not have been difficult to construct, Kennedy noted that a bit of planning was necessary to complete the precise shape.

“In the case of those circles that [are] near-precise circles, it would have required at least one person as ‘architect,'”

“That would also explain the glitches [in the circles] where the land was uneven,”

What researchers now want is to determine the purpose of these circles, which are unlikely, Kennedy says, to have been used as corrals.