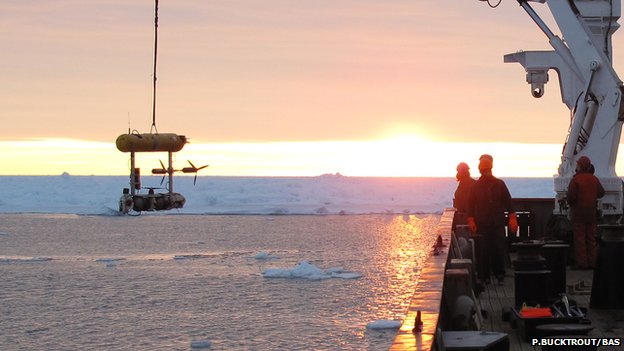 How Arctic and Antarctic sea ice changes over time remains a crucial indicator of climate change. An international team of scientists managed to measure the thickness of the Antarctic sea ice using an underwater robot. They discovered ice blocks of up to 56 feet thick. However, there are no temporal terms of comparison, because this is the first time when such a measurement has been completed. Until now, researchers relied on ice breakers to provided information, although limited, regarding the sea ice dimensions.

According to an Antarctica international treaty, the presence of nuclear submarines in the southern ocean is forbidden. It is not the case at the other end of the world, where nuclear submarines travel the Arctic Ocean since the 1950s. Accurate measurements over several decades indicate a reduction in sea ice of around 40 percent in the Arctic Ocean, said Dr Jeremy Wilkinson, from British Antarctic Survey. In the meantime, Antarctica sea ice reaches record levels and scientists want to understand the origin of this discrepancy.

With the help of Autonomous Underwater Vehicle, scientists produced high resolution 3D images of the Antarctic ice ridges. Jaguar, as researchers named the robot, covered large areas of sea at about 100 feet under the thick sea ice. Jaguar measures ice thickness by sending an acoustic pulse. When the pulse returns after hitting the bottom of sea ice, the robot calculates the ice sheet thickness. Scientists used the robot to measure the sea ice in six locations.

“Working with robots under water is more challenging but there have been significant advances in the technology,” said Ted Maksym, a Woods Hole Oceanographic Institution scientist and co-author of the paper published in Monday in Nature Geoscience.

“If you compare that to what we did in the past, we might drill 100 holes in a flow to assessment thickness. With an AUV, we are getting the equivalent of hundreds of thousands of drill holes. The amount of detail and area we can cover is really a step change from what we could do before,” Maksym added.

This is the first major example of underwater scientific drone usage. Aerial drones already turned into essential tools in scientific research. Drones can go where no man has gone before, but, moreover, they can cover large surfaces for longer periods of time. Wild fires and avalanches will be kept under stricter control with the help of drones from now on.