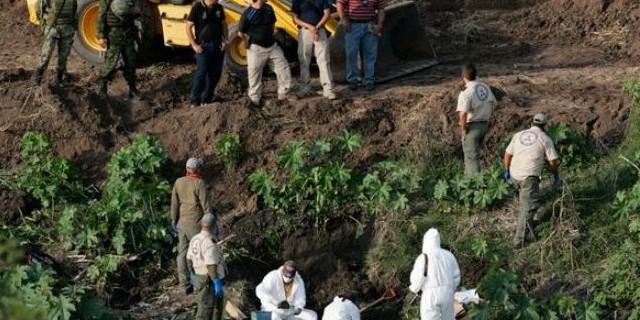 Security forces investigating the role of municipal police in clashes in Iguala, Mexico a week ago, found a mass grave on the edge of town, raising fears the pits might hold the 43 students missing since the violence that also resulted in six shooting deaths. Security officials said earlier they believed the victims had been driven to the end of the track, walked up the hillside, executed and buried in six graves.

The semiofficial National Human Rights Commission said Sunday that experts will conduct DNA tests in an attempt to identify bodies found in the graves. It was not yet clear how many bodies were present. Moreover, it could be days before the identities of the dead are known for sure.

State Prosecutor Inaky Blanco said the corpses were too badly damaged for immediate identification. He said genetic testing of the remains could take up to two months. Blanco also said one of the people detained in the case had told investigators that 17 students were taken to the gravesite and killed there. But he stressed that investigators had not confirmed the person’s story.

State police and prosecutors have been investigating the Iguala city police for misconduct during a series of violent incidents last weekend that resulted in six shooting deaths and more than two dozen people injured. Investigators said video showed police taking away an undetermined number of student protesters after a confrontation.

The students disappeared last weekend after they tried to commandeer three buses to take them to Mexico City for an anniversary march marking the 1968 army massacre of hundreds of protesters in the Mexican capital’s Tlatelolco plaza, state investigators said. But local police responded with gunshots, killing two students, according to state officials.

An unidentified gunman several hours later fired on another bus and several taxis on a nearby highway, killing three more people, the officials said. The brutalized body of another student was discovered the next day, flesh carved from his face, according to press accounts.

A bus carrying members of the third division Chilpancingo Hornets soccer club was among those ambushed in what authorities described as three attacks on September 26. A 15-year-old player on the team was killed. Omar Sanchez, one of his teammates, described the ambush to CNN.

“We were just watching a movie and we saw the bullets come in and then it was like we were going off a cliff and the bus tipped over. And it was then that they started firing at us with machine guns,” he said. “It sounded so ugly, the gunshots and my teammates screaming, ‘Help, leave us alone, we are injured.’ A teacher said, ‘you have already blinded me, please, we are the team from Chilpancingo.”