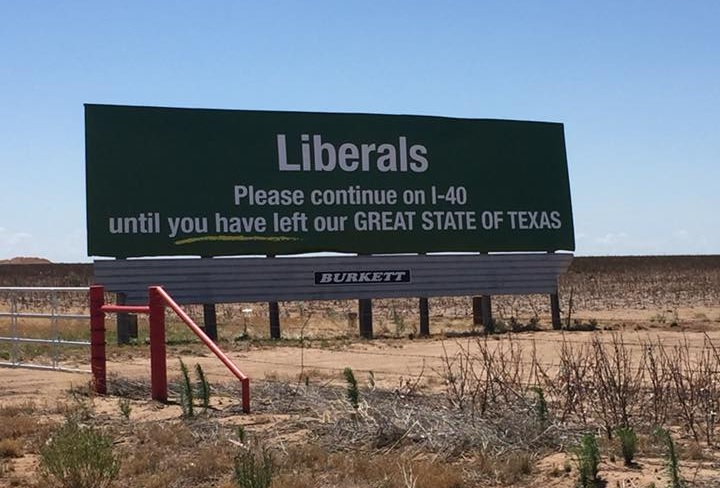 A photo of a billboard on Texas interstate I-40 politely asking liberal motorists to continue driving until they leave the “GREAT STATE OF TEXAS” has gone viral on social media.

Liberals, please continue on I-40 until you have left our GREAT STATE OF TEXAS,

According to a local news station, the sign was spotted near Vega, TX, a town with fewer than 1,000 residents.

The photo was posted on Facebook Monday and has so far accrued over 11,000 shares. Some Facebook users blasted the message, urging authorities to take the billboard down, while others praised the man behind the message as a “fine American.”

It is not the first time the Lone Star State is making national headlines over a billboard. Last summer, a Trump supporter paid for ad space to criticize ABC News over the “biased” stories about Russia’ interference in the United States’ 2016 presidential election.

The author, Kyle Courtney, said he grew up with ABC News but the latest coverage of the Trump-Russia affair has let him down.  Courtney was upset because the news network presented allegations of a Russia collusion with the Trump campaign as a fact before any official investigation had reached such conclusion.

But such billboards should not be a surprise as Texas is a well-known conservative stronghold. Californian conservatives even have a joke saying that if the liberal state “goes to hell” they’ll just move to Texas. In fact, many liberals from the nation’s most populous liberal state have already moved.

For instance, Paul Chatobot, who was born in California, decided to move to Texas after running for a congressional seat last year without success. While California has ended state funding for trips to the Lone Star State, Chatbot has launched an initiative that helps California conservatives to escape the state and move to suburban north Texas.
Image Source: Facebook