You are here: Home / Archives for mass grave Mexico 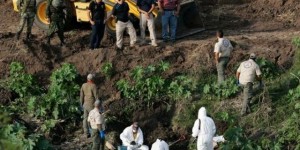 Security forces investigating the role of municipal police in clashes in Iguala, Mexico a week ago, found a mass grave on the edge of town, raising fears the pits might hold the 43 students missing since the violence that also resulted in six shooting deaths. Security officials said earlier they believed the victims had been driven to the end of the track, walked up the hillside, executed and … END_OF_DOCUMENT_TOKEN_TO_BE_REPLACED