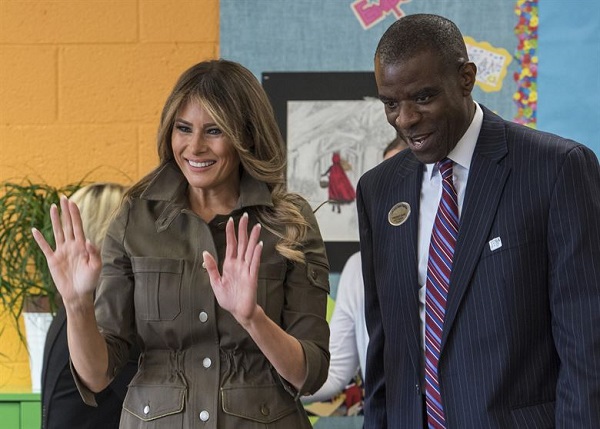 On Monday, First Lady Melania Trump underwent a severe medical procedure, but her condition is now stable. Sources said Mrs. Trump was recovering from a kidney surgery to treat a “benign” condition at the Walter Reed National Military Medical Center.

The First Lady’s office announced that the embolization procedure was “successful” and there were no complications. Mrs. Trump will remain in the hospital for one week.

The first lady looks forward to a full recovery so she can continue her work on behalf of children everywhere,

President Donald Trump did not leave the White House during his wife’s surgery. On Monday, he tweeted that he was heading to the hospital to see Mrs. Trump. The Commander-in-Chief added that she was in “good spirits” and thanked all “well-wishers.”

Mrs. Trump, 48, is the first First Lady to undergo such a complicated medical procedure during her tenure. The last time a First Lady had a serious medical intervention was Nancy Reagan in 1987 when she had a mastectomy. Other First Ladies who underwent mastectomies include Rosalynn Carter (April 1977) and Betty Ford (September 1974).

Mrs. Trump chose to stay away from Washington D.C. for the first six months after her husband was sworn in. She wanted to remain in New York to be near her son Barron until he finished the school year.

Last month, she started going out in the public more and organized the first official state dinner. Earlier last week, she unveiled her first official agenda called “Be Best,” which will be focused on the well-being of children.

The initiative was announced during a Rose Garden ceremony in an 11-minute speech. It was the longest public speech during her tenure.
Image Source: defense.gov