You are here: Home / Business / Asian Equities have European Stocks on the Rise

While the dollar was holding gains against the euro, copper and oil were falling, European and Asian stocks rose, policy makers still hadn’t decided whether they would be adding stimulus in manufacturing data from China to Germany.

Both the MSCI Asia Pacific Index and the Stoxx Europe 600 Index rose by 8 AM in London both by 0.2 percent, while China’s benchmark stock index was still rising to its one-week high. 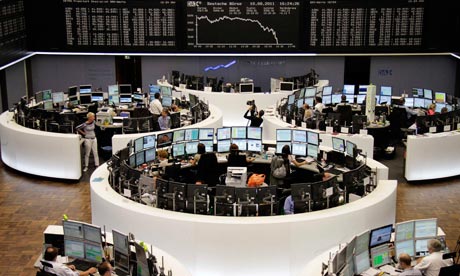 US market closed for the Labor Day Holiday but despite that, Standard & Poor’s 500 Index futures weren’t changed.

It was also now that the greenback touched its strongest levels in one year against the Euro, while crude dropped by 0.3 percent and copper by 0.5 percent in the London Metal Exchange.

Yields tumbled while the dollar was advancing and bets policy makers made it clear that they would continue their support of underpinned economies that were acing the biggest monthly gain since February in global stocks.

This week, some central banks will be meeting on policy and will be discussing factory output after an Official Chinese gauge fell for the first time since February.

At the same time, the European Union will be assessing the sanctions that it vowed to impose on Russia after its involvement in the Ukrainian conflict.

Nader Naeimi, who is overseeing assed allocations at AMP Capital Investors Ltd., believes that the market is currently treating bad news as good news. He believes that in light of China’s trend of introducing more stimuli when economic data weakens, the market still won’t be experiencing significant shake-downs. In fact, despite the Ukrainian conflict and what many of us would expect, the impact of the conflict on the global economy will be minimal.

Many markets in Vietnam and Malaysia will be closing down for holidays while in Europe, countries like Germany and the U.K. will be releasing updates on the factory sector.

In Germany alone, exports rose 0.9 percent during the second quarter from exports done in the first three months of the year. Germany actually exceeded the 0.2 percent increase that economists had projected. Imports also rose 1.6 percent while the Gross Domestic Product decreased 0.2 percent in Europe’s largest economy.

What the entire world is now expecting is how Russia, the world’s largest energy exporter, will be sanctioned by the European Union. It may have its finance industries and energy targeted by the European Commission as it drafts new proposals in the weekend for harsher sanctions.