You are here: Home / Business / Tesla’s Autopilot Software To ‘Nag’ Drivers to Keep Hands on Wheel

Tesla Motors has updated its cars’ autopilot software to nag drivers more to keep their hands on the steering wheel while driving. Several drivers reported that, after the update, the software has become more naggish.

Tesla insists that the Autopilot is not an autonomous mode. It is a driver assist system that requires the driver to keep his hands on the wheel and stay alert. Many drivers haven’t understood this and allowed the Autopilot to fully take over which led to some tragic car crashes.

Tesla drivers are now talking about an “Autopilot nag” which prompts them not to take their hands off the wheel and their eyes off the road. The steering wheel has pressure sensors that can tell if the driver’s hands are on the wheel.

If the sensors cannot detect enough pressure they prompt the driver to put his hands on the wheel via repeated notifications. In 2016, the “Autopilot nag” become more bothering, with more alerts about “Holding Steering Wheel”.

Below 45 mph, the system started beaming alerts after 5 minutes when there were no curves on the road. Over 45mph, the alert started after one minute if there was no car in front of the Tesla and three minutes if there was a car ahead.

Last week, Tesla updated the system to make it safer, which implies that more nags are coming. After the latest update, the alert to keep the hands on the steering wheel appears after 15-20 seconds.

Tesla drivers were so displeased with the update that Tesla’s CEO Elon Musk had some explaining to do on Twitter: 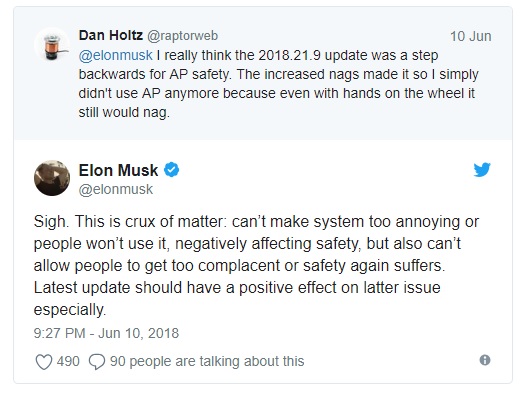 Some drivers have complained about the system not detecting them touching the steering wheel if there is not enough pressure. Paradoxically, if there is too much pressure Autosteer gets turned off automatically.
Image Source: Flickr